For Salman Khan and Dabanggg 3 (produced by Arbaaz Khan) franchise fans, a double bonanza is coming up in the month of October. The movie releases on December 20, barely three months from now and not one but two glimpses of Prabhu Devas’s next, starring Salman Khan, Sonakshi Sinha, Kichcha Sudeep, Saiee and Mahesh Manjrekar, will be seen across theatres in October – a 90 second teaser and a three-minute trailer loaded with action between Salman and Kichcha Sudeep. Interestingly, while the teaser will appear with War on October 2, the trailer will appear with Housefull 4 on October 25. 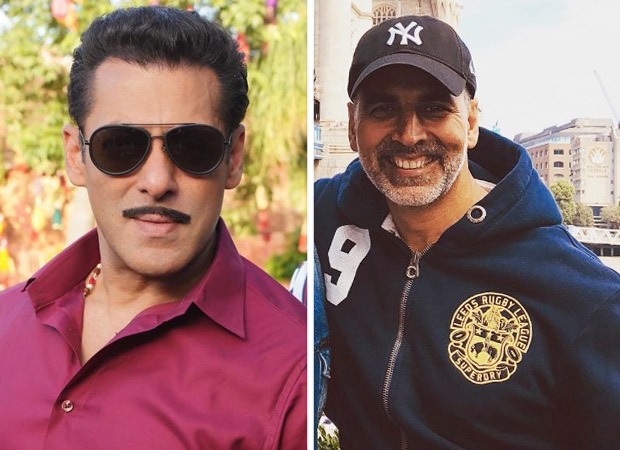 Housefull 4, produced by Sajid Nadiadwala and directed by Farhad Samji, stars Akshay Kumar, Kriti Sanon, Riteish Deshmukh, Kriti Kharbanda, Bobby Deol, Pooja Hegde and Rana Daggubati among others. Akshay and Salman are expected to clash for their next big releases on Eid 2020, which is a big date for Bollywood releases and has had Salman usually occupying the slot. Akshay has already announced, Laxmmi Bomb, as his Eid release next year.

Says a trade source, “Sajid Nadiadwala and Salman are very good friends so it was natural that Salman would request Sajid to attach Dabangg 3 trailer to his movie. Housefull 4 is one of the biggest entertainers of 2019, greatly anticipated with a huge star cast and exciting theme of reincarnation and releasing during Diwali, so attaching any trailer with it will garner maximum eyeballs. While much has been spoken about Salman and Akshay’s clash during Eid 2020, the trailer release proves that there is no issue between them. Akshay would know that Dabangg trailer is appearing with Housefull 4 as Sajid would have informed him. But Dabangg 3 trailer releasing with Housefull 4 in theatres will be exciting and many will flock to watch a glimpse of the highly anticipated action cop drama on the big screen. While Housefull 4 is a family entertainer, the Dabangg 3 is said to have some stunning action sequences.”

The trade source adds that the double treat for Salman fans is an intelligent marketing strategy. “Dabangg 3 releases on December 20, about three months away and Salman and producer Arbaaz Khan are going all out to keep the fans interest alive for the movie. It’s one of the most anticipated movies of the year and everybody is keen to know when the first creative will hit the audiences. The makers have now planned a double treat. After the 18-second motion teaser which was released last week on social media, now Salman and Arbaaz have decided to give two glimpses of Dabangg 3 for the audiences. One is a 90-second second teaser which will be attached to Hrithik Roshan and Tiger Shroff’s War movie which releases across theatres on October 2 and a social media release a day before and a three-minute trailer which will be attached to the Akshay Kumar-Riteish Deshmukh-Bobby Deol starrer, Housefull 4, which releases on October 25, and is the Diwali (October 27) week. Both War and Housefull 4 are huge releases and are expected to garner the maximum eyeballs, hence the decision was taken for the two creatives to release on two days.”

The source adds that the teaser is expected to have a glimpse of Salman (as Chulbul Pandey) as he is now and in his younger avatar and Sonakshi Sinha as his wife Rajjo. “The trailer will give introduce south star Kichcha Sudeep who plays the antagonist and negative lead in Dabangg 3 and Mahesh Manjrekar’s daughter Saiee. It will also give a glimpse of high-octane action sequences. The first song between Salman and Sonakshi will come in the second week of November. Though Prabhu Deva, Salman Khan and the Dabangg 3 unit are currently shooting for the movie in Mumbai, post-production work is going on simultaneously and the director is working on the teaser post the shoot so he gets it ready by October 2. The teaser will first release on social media on October 1 by Salman, Kichcha, Sonakshi, Prabhu Deva and Arbaaz and then will appear again at the theatres the next day with War.”

A source from the creative team of Dabangg 3 confirmed the news.