Amidst tough competition between popular celebrities, the dance reality show Jhalak Dikhhla Jaa 10 has finally come to an end. Featuring Madhuri Dixit, Karan Johar, Nora Fatehi, and Terence Lewis as its judges, the show had an interesting mix of celebrities, from popular TV stars to a chef to a junior dancing talent as its contestants. The much talked about grand finale, which had Rubina Dilaik, Faisal Shaikh aka, Mr. Faisu, amongst others as its finalists, saw child celebrity dancer Gunjan Sinha as the winner. In an exclusive interview with Bollywood Hungama, Gunjan opened up about being a part of the show. 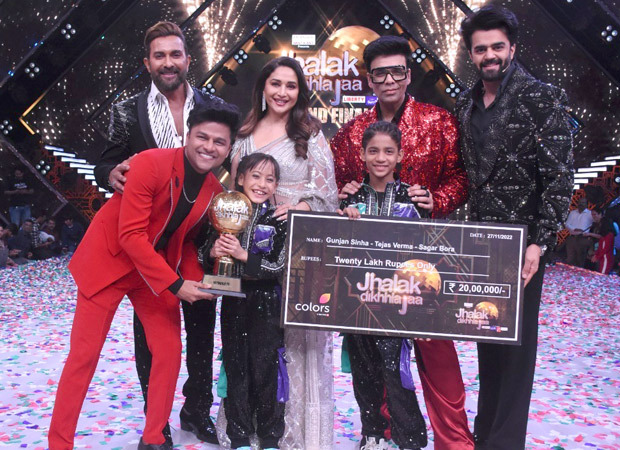 Talking about something that she learned from Jhalak Dikhhla Jaa 10, Gunjan Sinha revealed that she sought inspiration for all her dances from none other than judge Madhuri Dixit. Gunjan told Bollywood Hungama, “I have learned a lot from Madhuri ma’am and her dance videos. I have always loved the kind of expression she gives. All my performances, by far, have been inspired by the way she used to give expressions in her dances.” Furthermore, the 8-year-old also spoke about the kind of bond she shares with her team members adding, “I am very glad to have met some of the biggest artists in the industry like Faisu bhaiyya (Faisal Shaikh), Niti didi (Niti Taylor), Amruta ma’am (Amruta Khanvilkar).” She further went on to add how her hard work has finally paid off. “Considering that there were so many big celebrities on the show, we worked really hard to win the trophy. And I am glad our dreams came true.”

Recalling the time she danced ‘Apsara Aali’ on the show, Gunjan went on to add, “It was my favourite performance. We performed Lavani and I received a standing ovation. It was such a surreal moment for me. In fact, everyone liked my performance so much that they described my dance as a different show altogether. I remember the judges saying that they are a part of Jhalak Dikhhla Jaa but I am a part of Gunjan Dikhhla Jaa. I laughed so hard. I can never forget that moment.”