Ayushmann Khurrana and Bhumi Pednekar were definitely the stars of 2017. They both gave individual successes with Bareilly Ki Barfi and Toilet– Ek Prem Katha and together they starred in the sleeper hit, RS Prasanna's Shubh Mangal Saavdhan. And guess what? The duo is set for hattrick but this time with a quirky romantic comedy. It was reported earlier that the two of them are set to reunite for a rom-com but the details were under wraps. 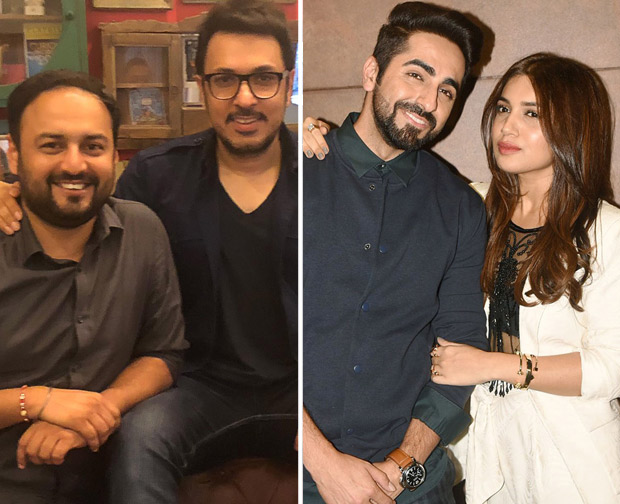 After the success of Stree, producer Dinesh Vijan announces a quirky comedy named Bala starring Ayushmann Khurrana and Bhumi Pednekar. The film has Ayushmann as a prematurely balding guy and Bhumi as a dusky small-town girl. After Dum Laga Ke Haisha and Shubh Mangal Saavdhan, the duo is gearing up to complete a hat-trick will reunite for this quirky laugh riot. The film will be directed by Amar Kaushik who directed one of this year’s biggest hits, the horror-comedy Stree. The film is expected to roll in March 2019 and is set to release in September same year.

Bala revolves around a guy who is balding prematurely and a dusky girl who is grappling with her own complexes brought on by her complexion. “Through their journey, the film impresses on the fact that most of us are usually attracted to outward beauty and don’t go beyond that to understand the real person. That’s one of the reasons so many relationships are falling apart today!” says Dinesh

The maker of off-beat entertainers like Stree and Irrfan Khan’s educative Hindi Medium, Dinesh reasons, “It’s a hilarious story but at the same time, it makes you think. The two characters are very interesting and easy to relate with, so is their small-town milieu.”

Quiz him on whether the 34-year-old actor was the obvious choice, Dinesh insists that Ayushmann is second to none in this quirky space given his comic timing and his interestingly innovative films, from Vicky Donor and Dum Laga Ke Haisha to Shubh Mangal Savdhaan and Badhaai Ho. “I’m really happy to be doing our film with Ayushmann.” he asserts. And will the role call for prosthetics? “Partly,” admits Dinesh, saying that they are getting the best guys in the business from the West to come down and set the look for the character. “I can’t wait to get started,” he says excitedly.

He’s equally excited to collaborate for the first time with Bhumi, pointing out that she’s a terrific actress with an interesting body of work. “In this film too she has an author-backed role of a modern-day woman trying to feel beautiful in a country that has long celebrated fair and lovely,” he asserts.

Confirming the news, Amar said, “I am completely in love with the way the script of Bala is shaping up and really excited about having Ayushmann and Bhoomi on board with us, two of the most talented actors of our times. Bala is going to be a fun and a very relatable film for the audience, bringing fore problems that many of us face everyday. Associating with Dinesh and the team of Maddock Films once again is just so lovely and also emotional after the super experience we had on Stree.”

When asked Dinesh, Why is the film titled, Bala? He adds Ayushmann’s character in the film is named Bala. “It’s his nickname really but I thought it was an apt title. It is also a tongue-in-cheek pun on his life story. Bal Aa Aaa Aaa,” says laughingly