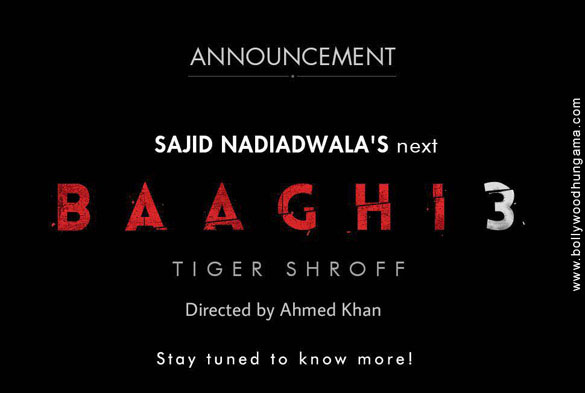 The makers Nadiadwala Grandson took to its Twitter handle and made the announcement. They revealed that Tiger Shroff will return to the action film. As of now, no leading lady has been announced. But, they did reveal that Baaghi 2 director Ahmed Khan will be helming the third installment as well. They wrote, "Drumrolls Our excitement level has just tripled! We are thrilled to share the 3rd instalment of #SajidNadiadwala’s Baaghi franchise starring @iTIGERSHROFF directed by @khan_ahmedasas."

Meanwhile, Tiger Shroff is gearing up for Baaghi 2 which stars Disha Patani opposite him. Recently, Jacqueline Fernandez shot for a peppy special number in the film and will recreate Madhuri Dixit's 'Ek Do Teen.'

Baaghi 2 brings back the power-packed rebel Tiger Shroff to the big screen in a never seen before avatar. Co-Produced by Fox Star Studios and Sajid Nadiadwala under the banner name Nadiadwala Grandson Entertainment, Baaghi 2 is directed by Ahmed Khan and is slated to release on March 30, 2018.