Salman Khan has had his fair share of a run-in with the legal system. From Arms Act case to blackbuck poaching case, the actor still has several legal problems. On 5th April 2018, the actor was convicted of five years imprisonment and a fine of Rs. 10000 being levied. Salman Khan spend two nights in jail before he was granted bail by the Jodhpur sessions court. He was granted bail on the condition that he will have to produce two sureties worth Rs 25,000 and a bail bond of Rs 50,000. He was asked not to leave the country without court’s permission. However, after submitting an application to the court, he was permitted to go abroad for work commitments. 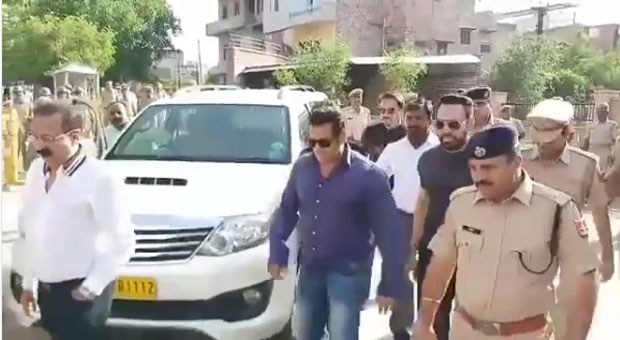 As per the next hearing court orders, Salman Khan appeared before the Jodhpur Districts and Sessions Court on Monday, May 7, 2018. This appearance was in regards to get his sentence suspended in the Blackbuck poaching case. The court has now set a new hearing date which is July 17, 2018. Salman Khan was accompanied by his team of lawyers, sister Alvira Khan and bodyguard Shera.

After Bigg Boss 11, Salman Khan will be back on Television with the new season of his hit reality show, Dus Ka Dum. Meanwhile, Salman Khan is busy shooting for Race 3. The film also stars Jacqueline Fernandez, Anil Kapoor, Bobby Deol, Saqib Saleem, and Daisy Shah. Directed by Remo D’souza and produced by Salman Khan Films and Tips, Race 3 will release on Eid 2018. He is also starring in Ali Abbas Zafar’s Bharat which is set for Eid 2019 release.

Also Read: WHOA! This picture of Amit Sadh and Salman Khan is a perfect Sultan reunion in Ladakh