Bigg Boss 12 Weekend Ka Vaar episode was all fun and frolic until Nehha Pendse got evicted from the show. The contestants played Navratri and the makers had organised special treats for the inmates on the festive occasion. Contestants from Dance Deewane had come to entertain the inmates plus, child prodigy Divyansh had come down to entertain everyone in the house. Another highlight of the episode was Sultani Akhada which happened between the prodigal Surbhi Rana and Dipika Kakar. The winner of this fight was Surbhi, with her argumentative nature she made sure that she got all the brownie points against Dipika. Salman then joked that she has got a power to directly evict someone, she promptly took Karanvir Bohra’s name but Salman later clarified that he was just kidding and she got no such power. 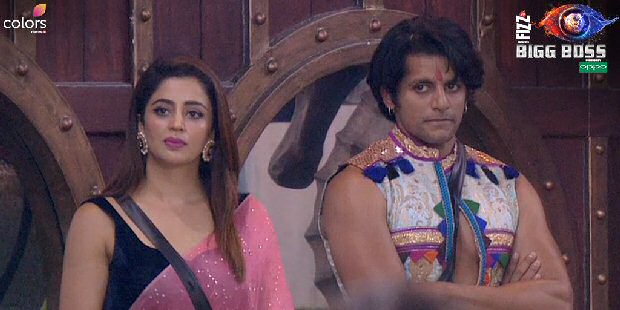 Actress Kajol visited the sets for the promotion of Helicopter Eela and it was the 90s all over again, with Salman and her exchanging banter. How we wanted them to break into a romantic song from their time! Kajol entered the house too and Jasleen-Shivashish, Urmila-Deepak danced to entertain her. It was pretty impressive. Kajol stirred up a controversy after she asked the contestant who they felt was the weakest contestant. There was a lot of disagreement amongst them and Nehha got very hurt that Dipika thought she was the weakest.  But it was proved that she indeed was the weakest contestant, as masses ultimately ousted her from the house.

Now, Bigg Boss is an interesting stage as the makers have gripped us with surprise eliminations and other twists in the plot.

Woah! Ved, Dinanath and Sonali are killing it with their performance and thumkas. #BB12 #BiggBoss12 #WeekendKaVaar pic.twitter.com/pHmadisiZM