Anup Jalota was evicted this week and we had predicted this a long time ago. While we were being fed that that Anup was in a relationship with Jasleen Matharu, who entered as his partner on the show ...looks like they really just had only a guru shishya relationship. They went on dates in house and also had a break up three weeks into the house but looks like all that was just a farce. No, Anup said that he knows Jasleen's father and never met Jasleen alone, per say. He said that he wants to set the record clear once and for all that he and Jasleen are NOT together. Now, that's shocking but highly plausible. Because the clues were all out there. 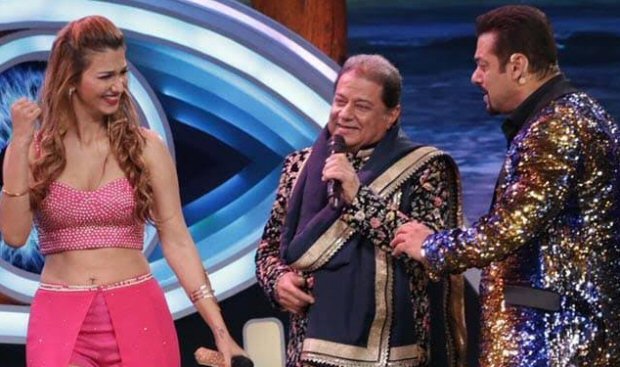 First, Jasleen refused to share bed with him on the first day, then her dad Kesar Matharu said that he was unaware of this relationship. Later, Jasleen refused to part with her clothes to save Anup who was banished to secret room. She then started getting friendly with Romil and Shivashish in the house. All this while, Anup was getting antsy and insecure. Now, after coming out of the show he is singing a different tune altogether.

He also added that he feels good coming out of the house because he can't fight with anyone, it doesn't suit him. He also does not feel the need to be competitive for no rhyme or reason. He said that he has a lot of experience in life and does not need a show to validate him but having said all this he will miss everyone in the house.

Also Read: Bigg Boss 12: Sreesanth REFUSES to go to Kaal Kothari; will he try to escape?