Netflix is bringing a lot of original content on its platform. One such upcoming film is Anurag Kashyap's Choked: Paisa Bolta Hai starring Saiyami Kher and Roshan Mathew. "Choked: Paisa Bolta Hai is very close to my heart. It is the story of a strong-willed middle-class housewife, who finds cash flowing out of her kitchen sink every night, and how this changes her life. It is about relationships -- and the precarious balance between truth, power and money," Anurag said. 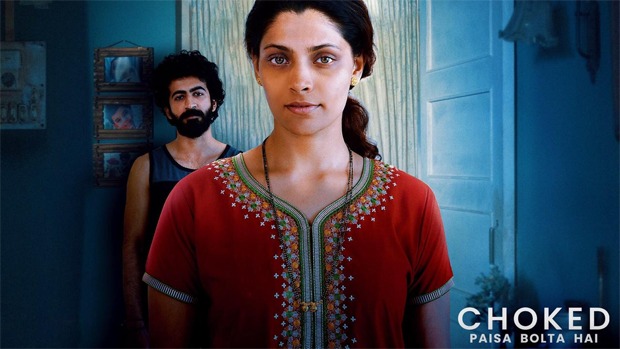 On Tuesday, Netflix released the first look and release date of the suspense drama. In the film, Saiyami stars as Sarita Pillai and Roshan will be seen as Sushant Pillai.

Talking about her character, Saiyami said. "Sarita is a 30-year-old middle-class woman. She is the sole breadwinner, she is overworked and frustrated, yet tenacious and always scheming to build 'that dream'. At one level Sarita is that every-woman. Nihit Bhave, our writer, has beautifully weaved the complexities of this middle-class family. And I thank Anurag for trusting me with Sarita and letting me bring her to life. Working on the film has been a life-changing experience for me."

Roshan feels his character is defeated, disgruntled, insecure, and suspicious. "These things made him very exciting to play. He was written beautifully by Nihit, and Anurag sir brought to him a unique kind of sensitivity that only he could. I'm lucky and proud to have been part of this film," he added.

A hapless bank cashier’s life takes a turn when she finds a source of unlimited money choked in her own kitchen. The film is directed by Anurag Kashyap and is releasing on June 5.