The most indispensable part of parenting, especially during the initial years, is supervision. It’s impossible that any parent would let the child go off their sights or that of the guardians. The fear that their kid might get hurt is forever looming over their heads. Vinod Kapri’s PIHU plays on this idea. It attempts to throw light on what happens when a child is let loose with nobody to look after, in an urban dwelling. The premise is quite intriguing, more so because it’s based on a true story. So does PIHU manage to give a nail-biting experience to the viewers? Or does it fail in its endeavour? Let’s analyse. 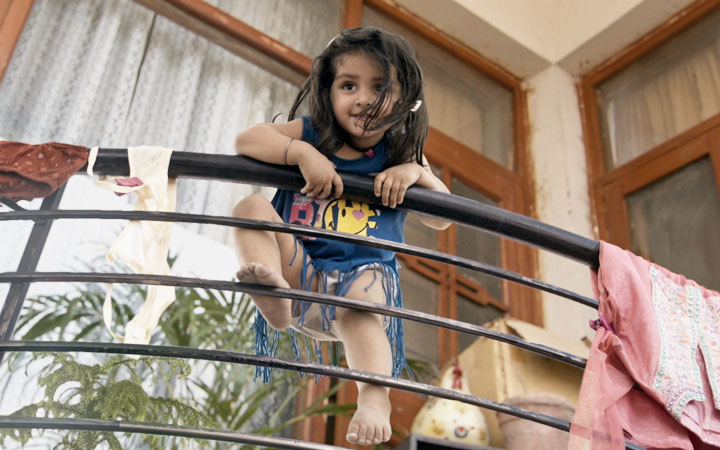 PIHU is the story of a toddler trapped in a house. Pihu (Myra Vishwakarma aka Pihu) turns two years old and her parents – Puja (Prerna Sharma) and Gaurav (voiced by Rahul Bagga) – throw a bash for her. At night, after Pihu goes to sleep, the parents have a huge showdown. They have had a lot of such fights in the past. The next day, Gaurav leaves for Kolkata for work purposes early in the morning. Unable to bear the trauma of the problems in her marriage, Puja consumes pills and ends her life. Pihu wakes up next to the lifeless body of Puja. However, she’s unable to comprehend that her mother is no more. She tries to wake her up but to no avail. Gaurav meanwhile calls Puja to scold her for not packing his bags and also to inform her that he forgot to switch off the iron. However, Pihu answers the phone and due to her young age, she’s unable to inform her father about her mother’s state. Pihu meanwhile also feels hungry and goes down to the kitchen to have milk and snacks. However, she wreaks havoc as she tries to use the gas stove, microwave oven and refrigerator. She also accidentally switches on the geyser. What happens next forms the rest of the film.

Vinod Kapri’s story is quite novel and interesting and it’s shocking to know that it’s based on a true story. Vinod Kapri’s screenplay (additional screenplay by Abhishek Sharma and Pihu herself) however has quite a few rough edges. It’s a bit too convenient after a point and also drags. Ideally, this 90 minute long film should have been further shorter by 15-20 minutes. Vinod Kapri’s dialogues are quite natural. Thankfully, subtitles have been provided and hence, one can correctly understand what the child is muttering.

Vinod Kapri’s direction is simple and uncomplicated. But he should have known where to draw the line. He just goes on and on using all the props available and somewhere, the impact gets diminished. On the positive side, a few scenes are very well executed like Pihu getting trapped in the refrigerator, Pihu trying to locate the source of the smoke in the bedroom and Pihu’s conversation with her father in the second half.

PIHU seems quite a lengthy fare as there’s no story as such and it moves at its own pace. The first 15-20 minutes are definitely arresting. The opening credits are in sync with the background noise played, depicting Pihu’s birthday celebrations. But soon, the film begins to lose its sheen. Survival dramas anyways are risky films as you really can’t do much with just one character. And there have been great films in this genre that have formed a benchmark. PIHU is nowhere close to it majorly due to the length. Moreover, few sequences are unconvincing. In order to up the scare quotient, Pihu is shown doing mischief with almost every appliance around – from television to gas stove to refrigerator to iron to microwave oven to geyser! After using all these aspects, Pihu moves to the balcony and as expected, she tries to climb the railing. All these scenes definitely give a heart-in-the-mouth scare but are also difficult to digest. Those who have infants in their house won’t be able to sit through the film. Finally, another major issue with the film is that the trailer, though quite impactful, showed a bit too much. As a result, one can anticipate about the various scary moments that will be shown in the film.

PIHU consists of just two actors with Myra Vishwakarma having the majority screen time. As expected, she does a tremendous job. Her looks and expressions are very cute and at many places, your heart goes to her. Vinod Kapri deserves kudos for extracting such a fine performance from such a young actor. Prerna Sharma appears dead throughout the film and is decent. Rahul Bagga’s voiceover is fine but he hams a bit, especially in the end. Hrishita Bhatt (voice of Meera) however is fine. The other voiceover artists like the angry neighbour, milkman, watchman etc go overboard.

Vishal Khurana’s music is a bit daily soap-like and could have been edgier. In a few scenes, it’s quite correct. Subash Sahoo’s sound designing is much better and enhances the thrill elements. Yogesh Jaini’s cinematography is captivating. It manages to capture the tension very well despite limitations in space and also give the film a theatrical look. Irene Dhar Malik, Sheeba Sehgal and Archit D Rastogi’s editing should have been slicker.

On the whole, PIHU rests on a very novel idea but the long length and certain unconvincing and disturbing developments act as spoilsport. This niche film carries low buzz and would find it difficult to lure in the audiences.