Phone Bhoot Movie Review: PHONE BHOOT has a fine first half with all the ingredients of a youthful, fun horror comedy. 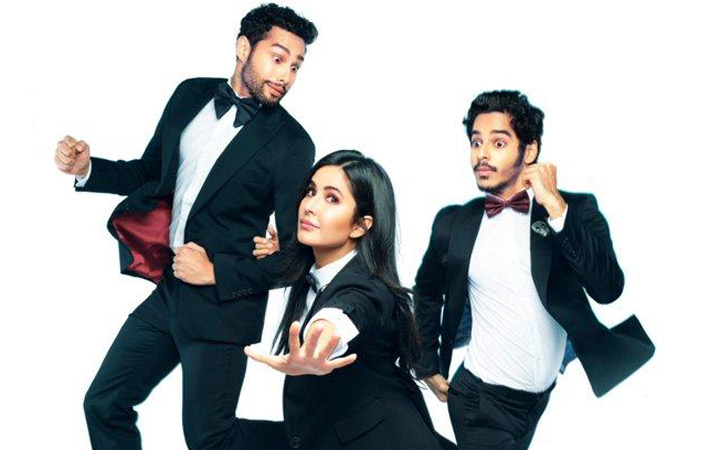 The music of Phone Bhoot is as whacky as the subject—of a friendly ghost and two ghost-busters. In this situation, the song ‘Jaau Jaan Se’ rendered by Lila Mishra and Rochak Kohli, composed by the latter, and penned by Kumaar, can be considered a musical misfit in the scheme of things, because it is a placid, romantic song, even an intense one as the lyrics suggest on the face of it (‘Tere Bina Yeh Saansein Adhoori / Sahi Na Jaaye Teri Yeh Doori’). That said, Kumaar’s ingenious mukhda, ‘Tu Jo Jaaye Main Jaau Jaan Se’ does give a subtle hint on losing life in a fun, romantic way!

Rochak pronounces the word Tu and Kitaab in the present ‘hot’ and ‘hit’ fashion like ‘Thu’ and ‘Kithaab’ and is on a clear trip of mimicking Arijit Singh even otherwise. Again, to attempt a thematic fit, we have the ‘Chill Mix’ of the same song with a mildly different orchestration. Essentially, a cosmetic change for audio and nothing more.

The other tracks are more in sync with the film. The truly ‘haunting’ one in this ghost story is ‘Kinna sona’, written and composed by Tanishk Bagchi with Zahrah S. Khan as the ‘spirit’ed co-singer! The mukhda - ‘Kinna sona lagda hai tu tu tu / Lagdi hoon main main main / Teri meri jodi / Cute lagde de de’ is an infectious hook that at first hearing sounded ordinary, but kept echoing as I went about my work! And I liked the way Zahrah placed a ‘cute’ emphasis on the word jodi!

‘Kaali Teri Gutt’ is the standard ‘today’ party item with Punjabi words dominating and a sprinkling of English. The song is given a faster tempo than the original folk-based song and new words (lyrics by Kumaar again, and music by Roy). Having said that, I feel the words, ‘Te Dil Te Golibaari Kardi / Look Teri Afghani’ are clever, even if irreverent!

Kumaar had once opined that using a mix of Punjabi and English made the phraseology fresh for the same thoughts expressed frequently in Hindi down the years. And one can see his point when we hear the line, ‘Gusse Vich Ki Dassiye / Lagdi Ae Kamaal Ni’! Sakshi Holkar and Romy as vocalists do the needful.

The ‘Phone Bhoot’ theme is written and sung by Baba Sehgal to a very typical ‘retro’ tune and orchestration that is a Mikey McCleary (the composer) trademark. The lyrics are nonsensical and in sync with the storyline, with rap incorporated as expected from Baba. And his singing matches by being aptly gimmicky.

This is meant to be a listen-and-groove-now-forget-it-later album. And it succeeds in its aim.

EXCLUSIVE: PhoneBhoot star Katrina Kaif wants to be an invisible ghost to silently to spectate THIS Bollywood director

Box Office: Kantara (Hindi) collects the most over the weekend, Phone Bhoot follows