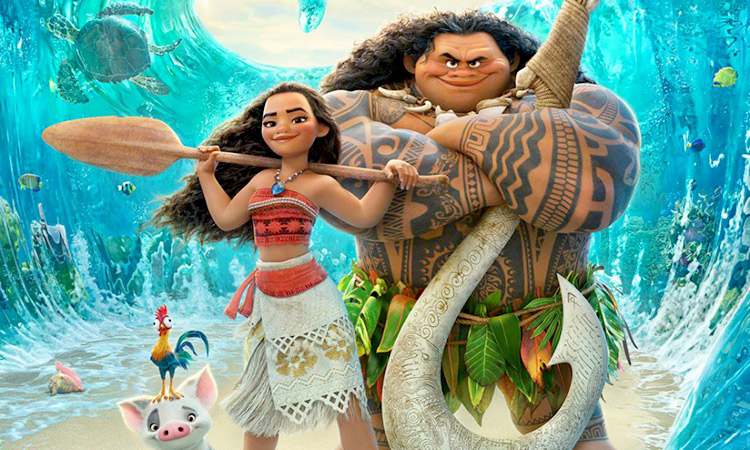 Over the years, the mega production house Disney once synonymous for its ‘Princess’ films diversified into offering different cinema. Now after the 2013 film FROZEN that introduced a new Disney princess named Elsa, we see Disney reveal yet another princess of sorts with MOANA.

Basically, Moana, an animated musical fantasy adventure film featuring the voices of Auli'i Cravalho, Dwayne Johnson, Rachel House, Temuera Morrison, Jemaine Clement, Nicole Scherzinger and Alan Tudyk, tells the story of Moana, the strong-willed daughter of the chief of a Polynesian tribe, who is chosen by the ocean itself to reunite a mystical relic with a goddess. When blight strikes her island, making coconuts rot on the trees and fishing boats return empty, Moana sets sail in search of Maui, a legendary demigod responsible for this disaster, and hopes to save her people. But will the film that sets up a whole new world work with the audience is what we analyse.

MOANA starts off with the story of Maui (Dwayne Johnson) a demigod of the wind and seas who with a magical hook manages to pull islands out of the sea, ending up stealing the heart of Te Fiti, an island goddess who created life. With her heart gone, the darkness sets in, laying waste to the living while slowly spreading across the world. In the meantime, Moana Waialiki (Auli'i Cravalho), a sea voyaging enthusiast, and the only daughter of a chief in a long line of navigators, leads an idyllic life oblivious to the fate that is headed her way. When the darkness starts to encroach on her island, whose chief Moana is set to become, the Young Turk must set off on an epic journey to find the heart of Te Fiti, locate Maui and replace the heart.

Right from the start, the viewer is thrown into a make believe animated world where everything seems more colourful if not larger than life. The breath taking visuals combined with the unworldly powers possessed by the shapeshifting demigod Maui to the humble upbringings and simple life led by Moana in her village, the film covers every aspect that the story encompasses. Though characters are introduced as they come on screen, directors John Musker and Ron Clements do a commendable job of keeping the introductory sequences short and within the framework of the film, thus taking the story forward.

Being an animation film, the makers of MOANA had ample opportunity to play around with the scope of the story. Unlike animated films that usually tend to overdo the special effects, MOANA keeps it simple with sweeping visuals that gather pace to build the crescendo for an action packed climax. In fact the animation of the character seems rather realistic with good use of conventional physics to lend weight and depth to the characters. Another high point for the film’s visuals is the development of liquid. Though recreating the mannerisms of liquid in CGI is a tough task, the makers of MOANA have done well, from high cresting waves to big splashes; they manage to capture the awe inspiring oceans very well.

Coming to the voice overs, Auli'i Cravalho all of 17 years does a marvellous job as Moana. A huge round of applause and a definite tip of the hat for the young girl as she not only voices her character with aplomb, but also lends mesmerising vocals to the songs in the film. Dwayne Johnson as the shapeshifting demigod Maui brings his character to life with vocals that perfectly capture the essence of his role. From being the self-indulgent demigod to his humbling revelation, Johnson stuns with his vocal gamut. Apart from that, he also doubles up as good singer managing to pull off a few high notes with ease.

On the whole, MOANA makes for a fun watch with quick paced visuals, pleasing music, catchy songs and relatable characters. But, considering that the film targets mainly the kids and has references to Maui culture a plenty, the film despite having a target audience, will have to rely heavily on positive word of mouth to post good box office figures in India.