Saif Ali Khan excels in all kinds of roles but his role of a cool dude in light-themed films has been a favourite for many moviegoers. He played such characters in several memorable films like HUM TUM [2004], SALAAM NAMASTE [2005], LOVE AAJ KAL [2009] and got immense praise. Now the actor is back in this space after a hiatus with JAWAANI JAANEMAN. It’s a special flick as it’s the first production under his new banner, Black Knight Films. So does JAWAANI JAANEMAN emerge as a fine piece of entertainer? Or does it fail to impress? Let’s analyse. 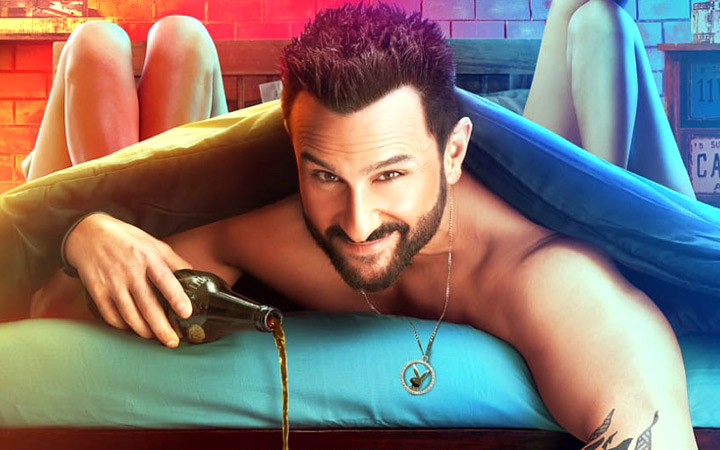 JAWAANI JAANEMAN is the story of a 40-year-old playboy whose life suddenly turns upside down. Jassi aka Jazz (Saif Ali Khan) is in his 40s and is based in London. He's single and in no mood to commit. By profession, he's a real estate broker and works with his brother Dimpu (Kumud Mishra). But he spends most of his time partying and getting involved with girls. He is also about to seal a redevelopment deal that will make him the biggest broker in London. Life is going great for him until one day he meets Tiya (Alaya F). At first he flirts with her, with the ultimate aim to take her to bed. However, she drops the bomb that she might be his daughter! To make matters worse, the DNA test confirms that they are related. And that's not all. It also comes to light that Tiya is pregnant! So Jazz finds out that he's not just someone's father but also to-be grandfather! What happens next forms the rest of the film.

JAWAANI JAANEMAN is a remake of an Italian film. The plot is promising and could have made for a hilarious and touching entertainer. The screenplay however is inconsistent and weak at many places. Only some scenes work and provide laughs. Hussain Dalal and Abbas Dalal's dialogues are witty and try their best to enhance the impact.

Nitin Kakkar's direction is average. He doesn’t keep the flow of the film organic. Some developments happen suddenly, be it Jazz developing feelings for Rhea (Kubbra Sait) or Jazz asking Tiya to shift in his house. These scenes are still digestible. But a scene in the second half where a local randomly accuses Jazz of cheating him in a property deal comes out of nowhere. Till now, viewers knew Jazz as a lazy worker but not someone who is deceitful. Hence, this revelation seems bizarre. On the positive side, he gets the emotion and humour right in some scenes. Also, he keeps the duration in check (119 minutes).

JAWAANI JAANEMAN starts off on an okay note as the viewers get introduced to Jazz and his playboy lifestyle. The film gets interesting once he gets Tiya home and she reveals the truth. It makes for a hilarious watch. Another memorable scene in the first half is when Jazz and Tiya meet Dr. Kriplani (Kiku Sharda). One expects lot more to happen but story just doesn’t move then. The intermission point is a bit awkward. Post interval thankfully there’s some movement in the story. But now the film drags. Also, the impact is weakened by property deal track. What brings some respite is the track of Ananya (Tabu) but even that loses fizz soon. The final scene of the film is heartwarming.

Saif Ali Khan is completely in his element and entertains thoroughly. Such kind of a role suits him to the T and he constantly tries to rise above the script. Alaya F makes an excellent debut and puts up a confident act. She looks gorgeous and is the only actor who moves viewers to an extent. She has a promising career ahead. Tabu has a late entry but raises loads of laughs. But her character has no emotional arc. Chunky Panday (Rocky) doesn’t have much to do initially. He has a crucial scene in the second half in the hospital but it doesn’t work. Kubbra Sait is adorable and one wishes to see more of her. Kumud Mishra is dependable. Kiku Sharda is funny. Dante Alexander (Rohan) is over the top, as per the character’s requirement. Rameet Sandhu (Tanvi) leaves a mark. Farida Jalal (Jazz’s mother), Shivendra Singh Mahal (Jazz’s father) and Diljohn Singh (Grover) are okay.

Manoj Kumar Khatoi's cinematography is pleasing. The locales of London are well captured. Urvi Ashar Kakkar and Shipra Rawal's production design is superior. Sanam Ratansi's costumes are quite glamorous and all the actors in the film look great. Sachinder Vats's editing (additional editing by Chandan Arora) jumps at places.

On the whole, JAWAANI JAANEMAN boasts of fine performances by Saif Ali Khan and newcomer Alaya F. But the direction is weak and emotionally, the film doesn’t work. At the box office, it will be a tough ride for the flick considering the lack of buzz.

1 Year of Jawaani Jaaneman: "I will cherish this experience forever" - says Alaya F on her debut film

Published on May 30, 2020 11:39 AM IST
Bollywood Hungama News Network https://www.bollywoodhungama.com/

Updated on May 27, 2020 11:15 AM IST
Bollywood Hungama News Network https://www.bollywoodhungama.com/

The chemistry of father and daughter is amazing. Since Saif is already father of 3 kids, one can…

It was ok ok, trailer was better than movie. Saif acting was not as good as portrayed in trailer,…

The movie is very well made and so entertaining. It has a strong message too which was told in a…