Beyond The Clouds Movie Review

The city of Mumbai has been shown by countless filmmakers, even by Hollywood filmmakers [the classic example being the Oscar-winning SLUMDOG MILLIONAIRE]. But there’s still lot to the city that largely remains unexplored. Acclaimed Iranian director Majid Majidi now takes up the challenge of weaving a sensitive tale in the fabric of the maximum city and the result is BEYOND THE CLOUDS? So does this film manage to leave the audiences in awe like it happened in previous Majidi films? Or does the master director fail to impress? Let’s analyse. 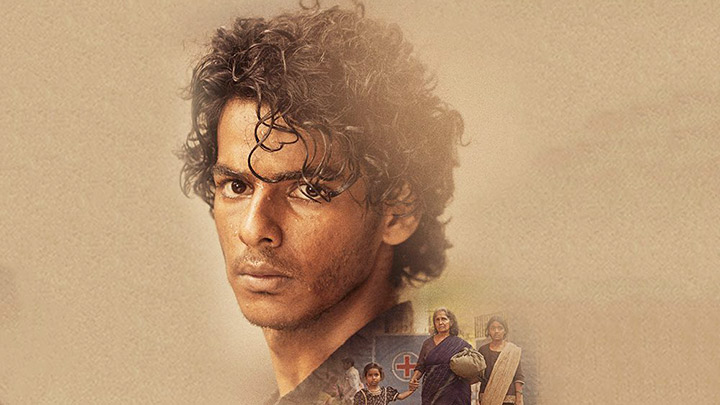 BEYOND THE CLOUDS is a story of hope and happiness in the times of despair. Aamir (Ishaan Khatter) is a young guy from Mumbai in his early 20s who peddles drugs for a living. One day, cops get on his trail and to escape their clutches, he seeks refuge at his sister Tara (Malavika Mohanan). He also gives her a drug package and tells her to hide it. Both Tara and Aamir are orphans and Aamir had separated from Tara after her ex-husband used to beat him up. The next day, Tara goes to collect the package at the 'dhobi ghat', where she works. She goes to meet Akshi (Gautam Ghose) who has hidden the package. Akshi however at this point tries to rape Tara and she brutally assaults him. She is arrested on charges of attempt to murder. When Aamir learns about this episode, he goes to the hospital and finds out that Akshi is severely injured and unable to walk and talk. It’s important for Akshi to testify to the cops that Tara hit him in self defence. Realising that the faster Akshi heals, the faster Tara will be released, Aamir starts attending to Akshi and his medical needs. In jail, Tara is disturbed and befriends Chotu, a young son of an inmate (Tannishtha Chatterjee). What happens next forms the rest of the film.

Majid Majidi’s story is simple and has scope for an emotional, touching fare. Majid Majidi and Mehran Kashani’s screenplay is a bit faulty in the first half but gets better in the second half. BEYOND THE CLOUDS’s first half is a mixed bag. In some of the scenes, the emotional graph goes over the top. For instance, Tara’s outburst after her argument with Aamir and Aamir banging on the police jeep at the railway crossing. Moreover, it was advertised as a film that’s entirely shot in Mumbai and has the city as a character. But shockingly, some of the scenes seem to be shot outside the city but are passed off as Mumbai. And the locations are such, like the railway crossing for instance, that one can easily make out that it’s not Mumbai. Even Tara’s house seems quite spacious for the city’s poorer section to which both Tara and Aamir belong. Also, the locality doesn’t give any feel of Mumbai. Even story-wise, there are some flaws. It is not established that under what circumstances Tara is arrested. Tara attacks Akshi in a place that was kind of in the middle of nowhere and she could have easily run away after the attack on Akshi. Whether she herself surrendered or whether she is caught by witnesses (the possibility is remote) is never shown. Moreover, the film focuses on the slums and poverty of Mumbai and hence, it immediately gives a déjà vu of SLUMDOG MILLIONAIRE [2009]. Questions might be raised as to why these international filmmakers always get interested in India’s poverty when the country has so much more to offer.

Thankfully, BEYOND THE CLOUDS has its share of pros too. The first half gets better once Aamir starts to visit Akshi in the hospital. The way he threatens him makes for a great watch. In the second half, the manner in which Aamir forms a bond with Akshi’s family is lovely and even quite moving. In the parallel track, Tara-Chotu’s relationship is also quite endearing. The ending is a bit ambiguous but the film ends on a happy note.

Vishal Bhardwaj’s Hindi dialogues are realistic but gets a bit unconvincing in the beginning portions. Majid Majidi’s direction goes a bit off track in some of the sequences of the first half. But overall, he tries to get creative with his execution and it works. The use of cloth and light, festival of Holi in the end and of course using the kids in the best way possible in his trademark style is surely impressive.

Majid Majidi also brings out great performances from his actors. Newcomer Ishaan Khatter is quite confident and takes the film to another level. He has the common man look and doesn’t possess any starry airs in his performance. This helps big time as he really looks like someone who belongs to the poorer section of the society. Watch out for him when he dances while injuring a person who betrayed him – it’s terrific! Malavika Mohanan doesn’t impress initially but then gets better and in control. Sadly, her screen time is quite limited as compared to that of Ishaan. Gautam Ghose conveys a lot through his performances and eyes. In the beginning however, he could have done a better job. G V Sharada (Jhumpa) delivers a brilliant performance and the sadness that she conveys through her eyes is seen to be believed. Dhwani Rajesh (Tanisha) is lovely and her track is quite crucial. Tannishtha Chatterjee is okay. The actors playing Anil and Rahoul are fair.

A R Rahman’s music is subtle and doesn’t stand out. But it is in sync with the narrative. The sole song ‘Ey Chhote Motor Chala’ is relegated to the background. Anil Mehta’s cinematography is award-worthy and captures the gritty side of Mumbai beautifully. Amaar Shetty’s action is real and raw. Hassan Hassandoost’s editing is decent. Mansi Dhruv Mehta’s production design and Planet D’s art direction is nice but is quite unrealistic in some of the scenes. Payal Saluja and Bibi Zeeba Miraie’s costumes however seem authentic.

On the whole, BEYOND THE CLOUDS is a nice, touching tale that works despite the minuses. At the box office however, its chances are bleak due to its niche appeal.

EXCLUSIVE: Shareen Mantri Kedia and Kishor Arora speak about signing Kartik Aaryan for their next; call him a ‘THOROUGH professional’; also reveal how they managed to get Majid Majidi on board for Beyond The Clouds

Published on May 3, 2019 10:48 AM IST
Bollywood Hungama News Network https://www.bollywoodhungama.com/

its one of the worst movies. super slow and boring.. if u want to hide from scroching heat dn only…