Last Updated 02.02.2023 | 10:41 PM IST
feedback language
follow us on
Bollywood Hungama » Movies » Movie Reviews » Aksar 2 Movie Review: The biggest problem with Aksar 2 is that it's dated in all respects making it a poor show all the way. It neither has enough sex nor thrill.

Aksar 2 Movie Review: The biggest problem with Aksar 2 is that it's dated in all respects making it a poor show all the way. It neither has enough sex nor thrill. 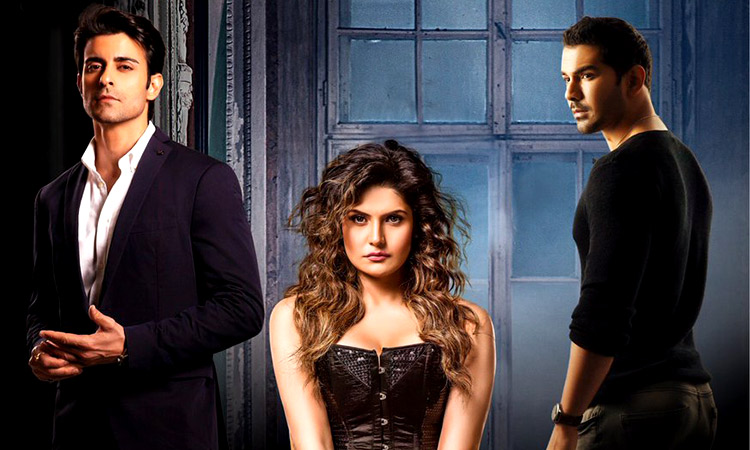 AKSAR 2 is the story of a governess of an ageing billionaire lady and how she becomes a pawn in the hands of those who want to steal her wealth. The governess of the ageing billionaire Mrs. Khambatta (Lillete Dubey) dies under mysterious circumstances. Her financial manager Pat (Gautam Rode) is asked to fill the vacancy immediately. Sheena Roy (Zareen Khan) is hired for the job. Despite Khambatta wanting an elderly lady, Pat manages to convince her to give Sheena a chance. However, the job doesn’t come easy for Sheena. Pat asks her to sleep with him if she wants to retain the job. Sheena needs the job desperately and also to support her boyfriend Ricky (Abhinav Shukla) who is facing financial crunch. Hence, Sheena submits to Pat’s advances. But suddenly things go wrong for Pat. Sheena shares secrets about Khambatta’s will that gives Pat’s sleepless nights. What happens next forms the rest of the film.

AKSAR 2’s biggest problem is that it’s dated in all respects. Director Ananth Narayan Mahadevan seems to be stuck in the 90s and hence, the film fails to impress. The first half is still bearable as one hopes that the story might take an intriguing and exciting turn. But the film falls completely flat in the second half. The entire plan made by Sheena and her gang doesn’t make any sense. It’s bewildering why Bachchan Singh (Mohit Madaan) gets involved in the whole madness when he was not going to get even a single rupee. Just to surprise viewers and add twists, the film goes in a total nonsense zone. In fact, the climax is difficult to comprehend and doesn’t make an iota of sense.

Narendra Bajaj’s story is silly. Sanjeev Puri’s screenplay is unexciting. A suspense thriller needs to be engaging and gripping. AKSAR 2, however is slow and replete with insipid moments. Sanjeev Puri’s dialogues however are fine at places.

Ananth Narayan Mahadevan’s direction is dated and doesn’t hold any appeal either for the multiplex audiences or even for the single screen audiences. The film is majorly promoted as an erotica but even the sex scenes are very few and far between. It’s shocking that on one hand, the director shines with films like GOUR HARI DASTAAN, DOCTOR RAKHMABAI, MEE SIDHUTAI SAPKAL etc and on the other hand, he makes a mockery of himself with THE XPOSE and now AKSAR 2.

Zareen Khan is strictly okay and though she is sizzling, it’s done just for the heck of it. She tries to be the female Emraan Hashmi but it doesn’t work for her. Performance-wise, she doesn’t give her best shot. Gautam Rode looks dashing but his performance leaves a lot to be desired. He’s shockingly hardly there in the second half. Abhinav Shukla tries too hard and looks too stylish for his character. Mohit Madaan is the best of the lot, especially when his character gets prominence. Lillete Dubey is decent. S Sreesanth (Gaurav), Rushad Rana (banker) and Denzil Smith (assassin) are strictly alright.

Mithoon’s music is nothing special and might have worked if it was used in some other, better film. ‘Jaana Ve’ and ‘Aaj Zid’ are incorporated to cater to the frontbenchers as it has loads of sex. ‘Tanhaiyaan’ appears in the second half and is forcefully put in the film. It looks very odd because the character is imagining having sex with a dead person and also crying since he’s no more! Background score however has the thrill-feel.

Maneesh Bhatt’s cinematography is fair but one can make out that the airport and monorail scenes have been shot using digital camera or Go Pro and it is quite visible. Allan Amin’s action is average. Muneesh Suppel’s production design is rich while Jeetendra Shah’s editing is fine.

On the whole, AKSAR 2 is a poor show all the way. It neither has enough sex nor thrill.

EXPLOSIVE: Ananth Narayan Mahadevan RIPS APART Aksar 2 producers for not paying him his fees; says "It was a totally DISGUSTING experience"

“Why was I not shown Aksar 2 after repeatedly requesting them for the same?” – Zareen Khan asks producers

Zareen Khan lashes out at makers of Aksar 2 for calling her unprofessional; terms it as eyewash