While she gained fame overnight, the other actress recently kicked off a highly successful run at the Bollywood box office. We are talking about Priya Prakash Varrier, the Mollywood wink sensation from Oru Adaar Love and De De Pyaar De actress Rakul Preet Singh. The two of them coming together will definitely set the screen on fire and it seems that this dream is going to come true very soon! However, let us tell you that this is not for a Bollywood film but for one of the South projects starring Nithiin. 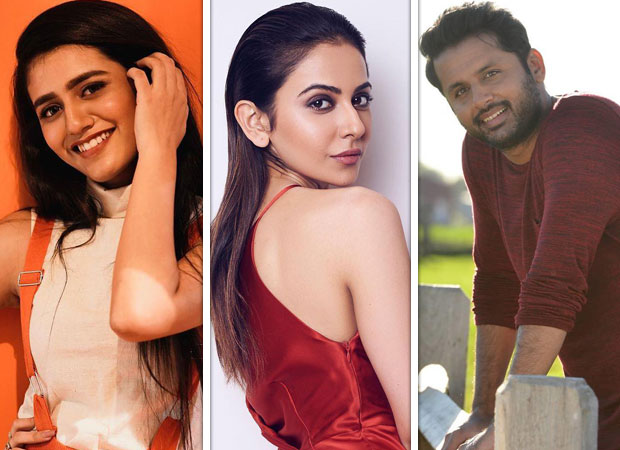 What more? The two actors will be romancing the Tollywood star in a forthcoming film directed by Yeleti Chandrashekar. Nithiin took to Twitter to make an announcement about the film where he posted a photo with the team including Priya Prakash Varrier but it didn’t feature Rakul Preet Singh. However, the actor confirmed in his tweet that Rakul will indeed be a part of the film and that he is super excited to work with the South-Bollywood actress.

His tweet read, “#Nithiin28 muhurtham done.. super excited to work with Yeleti Chandrashekar garu..this film is goin to b Special!! @Rakulpreet finallyyy workin together #priyaprakashvarrier plays d other lead,produced by bhavya anand prasad garu n music by ⁦@mmkeeravaani garu.” The film is yet to be titled and considering the current trend, the film is called Nithiin28.

On the work front, while Priya Prakash Varrier is awaiting the release of her film Sridevi Bungalow that has stirred controversy over its title, Rakul Preet Singh will next be seen in Marjaavaan and Manmadhudu 2 amongst others. Coming to actor Nithiin, who has worked in Bollywood in the past in the Ram Gopal Varma film Agyaat, is working in the Venky Kudumula directorial Bheeshma.

Also Read: Rakul Preet Singh is all smiles as she visits the BBC Radio Asia Network in London!