Superstar Vijay has completed 100 days of shooting his upcoming film Beast. Celebrating the milestone, Beast director Nelson Dilipkumar shared a picture, which has gone viral on social media. The photo features Vijay, Nelson, Pooja Hegde and other cast and crew members of the movie Beast. 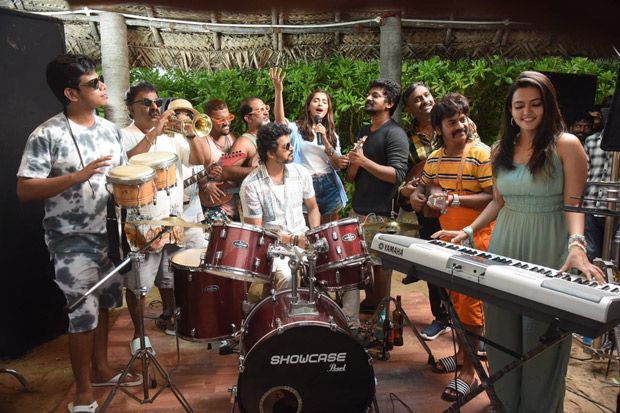 While Pooja has a mic in her hand and she appears to be singing, Vijay is on the drums. He is seen wearing a white t-shirt, which he has paired up with a cool shirt and stylish sunglasses. Sharing the fun picture from the sets of Beast, the director wrote, “It’s ‘100th day of shooting’ 100 days of fun with these amazing people.”

Beast is written and directed by Nelson Dilipkumar, as it marks Vijay’s 65th film. The film went on floors earlier this year. However, the shoot was halted as the second wave of coronavirus pandemic brought the country to a standstill again. Later, in April this year, Vijay and Nelson left for Georgia, where the shooting had begun again.

Beast is Pooja’s first film with the superstar Vijay. It also is her comeback to Tamil cinema after a gap of nine years. The actor, who has several interesting projects in her kitty, made her silver screen debut with director Mysskin’s crime drama Mugamoodi in 2012.

On the work front, apart from Beast, Vijay has signed a Vamshi Paidipally directorial, which will be produced by Dil Raju. Whereas Pooja Hegde’s Radhe Shyam is releasing on 14th January 2022. Radhe Shyam is an upcoming Indian period sci-fi romantic drama film written and directed by Radha Krishna Kumar, starring Prabhas next to Pooja Hegde.