After directing blockbuster films Baahubali and Baahubali 2, audiences have been waiting for filmmaker S.S Rajamouli to release his next magnum opus. Rajamouli's next titled RRR was announced over a year ago. Owing to the pandemic the shoot of the film was delayed. However, they resumed shooting in October last year and now have started shooting the climax of the film with the lead actors Ram Charan and Jr NTR. 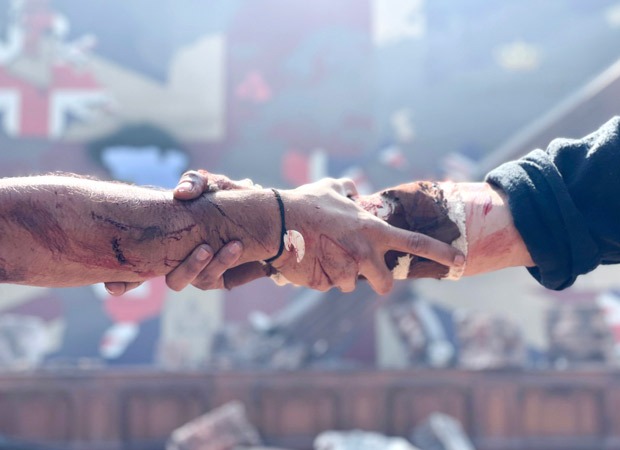 On Tuesday afternoon, SS Rajamouli took to his Twitter handle to share an image which looks like a scene from the film where the two lead actors are seen locking their bruised hands. "The CLIMAX shoot has begun! My Ramaraju and Bheem come together to accomplish what they desired to achieve,” the filmmaker captioned the post.

The CLIMAX shoot has begun!

My Ramaraju and Bheem come together to accomplish what they desired to achieve... #RRRMovie #RRR pic.twitter.com/4xaWd52CUR

The film sees Jr. NTR, Ram Charan, Ajay Devgn, Alia Bhatt, Olivia Morris, and several others in pivotal roles. Directed by S.S Rajamouli and bankrolled by DVV Danayya under the banner of DVV Entertainment Banner, RRR is a period drama that narrates a fictional take on the younger days of celebrated freedom fighters Komaram Bheem and Alluri Seetharamaraju. The film is set for release in Telugu, Hindi, Tamil, Malayalam, and Kannada alongside several other Indian languages.

ALSO READ: Alia Bhatt says shooting RRR with SS Rajmouli was a different experience as she had to say lines in Hindi and Telugu