South actress Samantha attended Nayanthara's birthday bash in Chennai on November 17. On Thursday, the actress took to Instagram to share a couple of pictures from the fun night and wished Nayanthara on her birthday. She penned a powerful note for Nayanthara on her special day. Nayanthara and Samantha will share screen space in Vignesh Shivan's Kaathuvaakula Rendu Kaadhal. 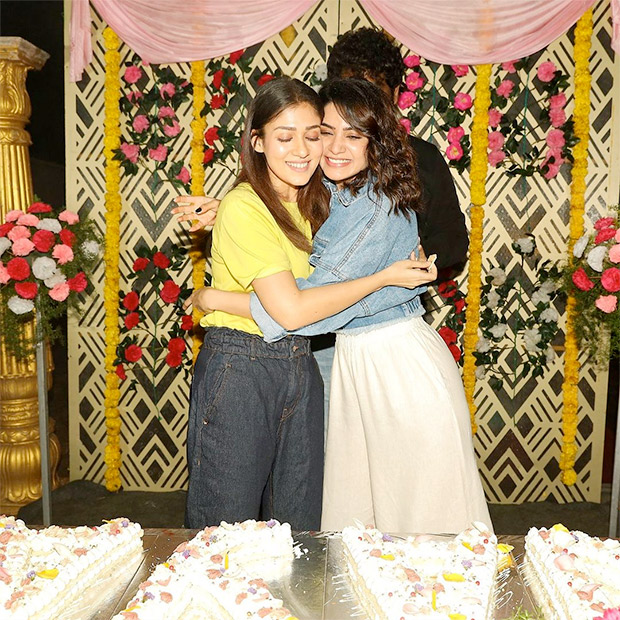 Nayanthara’s fiancé, Vignesh Shivan hosted a birthday party in Chennai. He took to social media to share photos and videos from the party. Vijay Sethupathi and Samantha, who are working with the couple on Kaathuvaakula Rendu Kaadhal, were among those who attended the birthday party.

Sharing a couple of photos from the birthday party on her Instagram handle, Samantha called her a queen. She wrote, "She came. She saw. She dared. She dreamed. She performed and she conquered!! Happy birthday Nayan. #happybirthdaynayanthara #queen #kaathuvaakularendukaadhal (sic)."

Talking about the film, Kaathuvaakula Rendu Kaadhal is a romantic comedy featuring Vijay Sethupathi, Nayanthara and Samantha in lead roles. The film is directed by Vignesh Shivan and produced by him and Nayanthara. The film is all set for a theatrical release in December.

While Vijay Sethupathi plays the role of Rambo, Nayanthara and Samantha will be seen in the roles of Kanmani and Khatija, respectively. Anirudh Ravichander has been roped in to compose the music for this film.