Lyca Productions have collaborated with Rajinikanth for many films including Enthiran and 2.0. They will now be joining hands with his daughter Aishwarya Rajinikanth for her forthcoming venture Lal Salaam. Releasing a title poster of the film a day ago, the production house also held a special pooja to kick start the pooja. It was attended by Aishwarya along with her father Rajinikanth along with the film’s leads played by Vishnu Vishal and Vikranth Santhosh. However, in a recent social media post, it was also confirmed that Rajinikanth will feature in the film, albeit in a cameo. 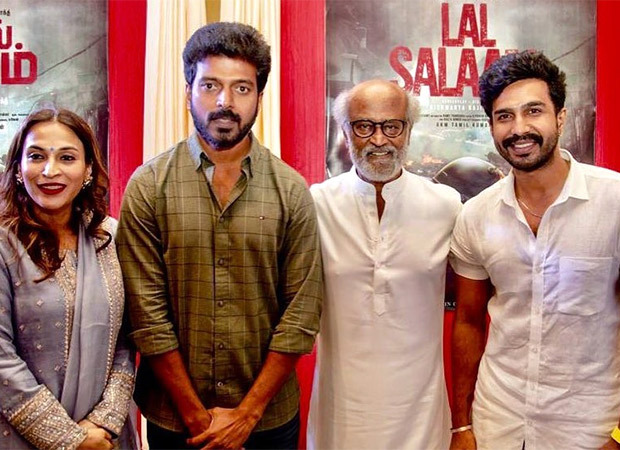 While many details of the film are currently kept under wraps, Lyca Productions announced the major information about the upcoming project on their official social media handle a day ago. Confirming the special appearance by Rajinikanth, the production house took to social media to talk about it saying, “We are extremely delighted to announce our next project, with the one & only Superstar ?? @rajinikanth in a special appearance!”

The title poster of Lal Salaam, which was posted a day ago, showcased a backdrop of riots with cricket accessories like a bat destroyed and a burning helmet on the ground. In the same post, they also announced that the film will be directed by Aishwarya Rajinikanth with music by A R Rahman.

In another post shared by the production house, they posted photographs from the pooja that was held a day ago to celebrate the launch of the film.

Sharing his excitement on social media about bagging Lal Salaam, Vikranth Santhosh said, “I can’t believe that this is really happening #LalSalaamWishing u only the best @aishwaryarajini ma’am #lalsalaam Let’s hit it out of the park.” Meanwhile the other leading man, Vishnu Vishal added, “With the one and only superstar @rajinikanth sir… And music maestro @arrahman sir… Alongside my buddy @vikranth_santhosh… A good script by @aishwaryarajini. Backed by the mighty @lyca_productions .. God is kind…”

Also Read: Rajinikanth Lookalike: Rehmat Gashkori opens up about being a doppelganger of a South superstar, “God had blessed me with the looks of a great actor and human”