Naga Chaitanya will be making his Bollywood debut with Laal Singh Chaddha. He is gearing up for yet another interesting debut. The actor will be making his Tamil debut with NC22 which is expected to be a bilingual. Also starring Krithi Shetty, as the leading lady, the Pooja ceremony for launching the film was held today amidst the presence of the film’s team including director of NC22, Venkat Prabhu. Besides that, his cousin Rana Daggubati and Tamil actor Siva Karthikeyan too were present at the launch. 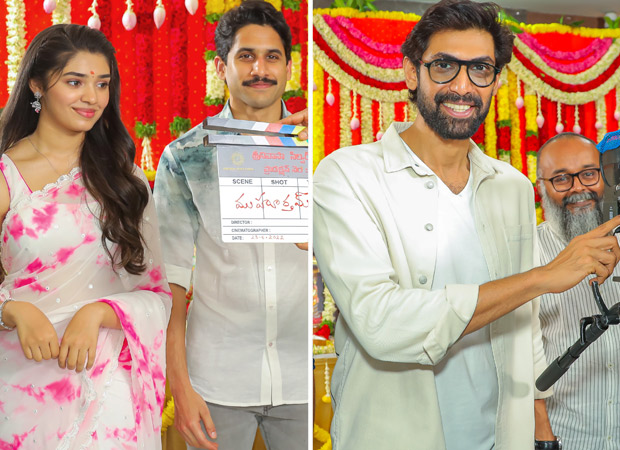 Speaking about NC22, Naga Chaitanya looks different in his new avatar as a simpleton with a moustache. While details of his role are kept under wraps, the new look has grabbed attention. Rana Daggubati was also clicked bonding with cast and crew of the film as he was invited to ‘switch the camera’ by the team of the film. He is the cousin of Naga Chaitanya on the maternal-side. Besides him, Sivakarthikeyan too was invited for the ceremony. Photos from the Pooja were shared on Twitter on the official production handle, Srinivasaa Silver Screen. Here, have a look at the post:

An Auspicious start to the Most Exciting Journey????

Elated to Kickstart the ambitious #NC22 with a Pooja Ceremony ????

An Auspicious start to the Most Exciting Journey????

Elated to Kickstart the ambitious #NC22 with a Pooja Ceremony ????

Furthermore, Venkat Prabhu will be collaborating with Isai Gnani Ilaiyaraaja and his son Yuvan Shankar Raja for the forthcoming directorial.  Sharing this on Twitter, he added, “A dream come true moment for me!! Joining hands with my uncle (periyappa) #isaignani @ilaiyaraaja for the first time along with my brother @thisisysr for #NC22 #VP11”. Besides this, the makers also shared the announcement of roping in Krithi Shetty as their leading lady on Twitter.

It only gets more exciting than ever before????

A beautiful performer with ever smiling face and abundance of talent.

NC22 will be a Tamil and Telugu bilingual that will be produced by Srinivasaa Chitturi under his Srinivasaa Silver production banner.

Also Read: “What I have learnt in last 12 years, I learnt from Aamir Khan in 45 days” – Naga Chaitanya on Laal Singh Chaddha