Last Updated 29.11.2022 | 10:22 AM IST
feedback language
follow us on
Bollywood Hungama » News » South Cinema » Nayanthara and husband Vignesh Shivan carry around the Indian tricolour on the streets of Spain on 75th Independence Day

Nayanthara and Vignesh Shivan were in Spain during August 15, when India celebrated its 75th Independence Day.  The newlyweds, who were seen exploring the beauty of the European country, decided to celebrate Independence Day, despite being not being in the country as they were seen carrying the Indian Tricolour with pride on the streets of Barcelona in Spain. 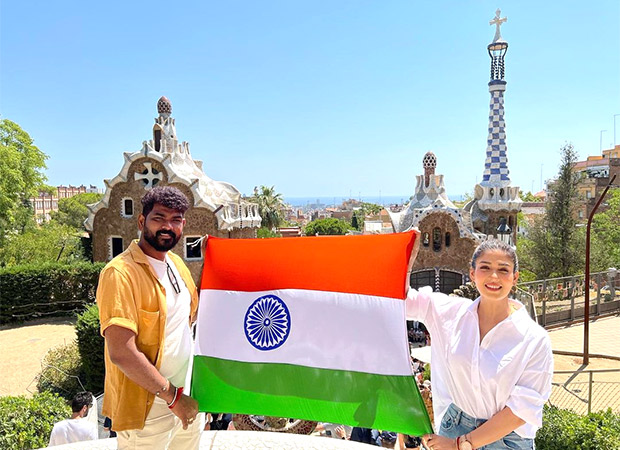 Nayanthara and Vignesh Shivan were seen dressed in casuals as the actress wore a white oversized shirt whereas her filmmaker hubby was seen in wearing beige and brown outfits as they explored the streets of Barcelona. The two of them decided to commemorate India and decided to walk around holding the Indian tricolour high amidst the crowded lanes. Vignesh, who is on Instagram, shared photos and a video from Spain. He captioned the photos saying, “Namma Kodi …. Spain engum….  #75yearsofindependence #india #75thindependenceday.” (Our flag… everywhere in Spain)

On the other hand, he also posted a video saying, “75 years of independence! Happy Independence Day to all brothers & sisters ! All the Indians across the globe ! Let’s celebrate this day with a lot of pride and happiness ! For being an Indian citizen we all should feel blessed ! The most free , safest , democratic , secured and happy home in the world is our country ! #ProudIndian #75thindependenceday #75yearsofindependence #India.”

Coming to their trip, the couple were seen exploring many places in Spain and Vignesh shared photos of his wife as they were seen travelling on an open roof bus and  the most recent one being a romantic photo with his wife against the backdrop of Sagrada Familia Church in Barcelona.