A day before Kamal Haasan celebrated his birthday, the Ulaganayakan took to social media to share an important update about his next. He announced his next collaboration with Mani Ratnam, 35 years after the duo joined hands for their biggest hit together, Nayagan. This time around, as the Tamil superstar turned a year older, his niece and Mani Ratnam’s wife Suhasini hosted a birthday bash with her family members at her residence. 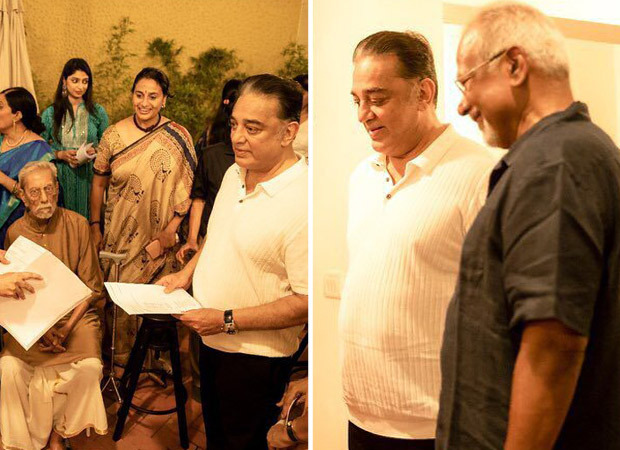 For the unversed, Suhasini Maniratnam, better known as actress Suhasini, is the daughter of Charu Haasan, The latter, also an actor, is the brother of Kamal Haasan. The popular actress took to Instagram to share a series of photos of Kamal meeting and spending quality time with the family on his birthday. While Kamal’s daughters Shruti and Akshara Haasan were missing from the celebrations, besides Suhasini, her cousin and Indira fame actress Anu Haasan was also a part of the celebrations, Anu is the daughter of the third Haasan brother Chandra Haasan, Sharing these glimpses of several warm moments from the family get-together, Suhasini said, “Celebrating Kamal at home ??????????”

On the other hand, the actress also shared another post that was dedicated to Kamal Haasan and her husband Mani Ratnam from the family get-together saying, “Great men coming together.”

Coming to their forthcoming collaboration, Raaj Kamal Films International (RKFI), Madras Talkies and Red Giant Movies came together to announce KH 234  which is expected to release in 2024. KH 234 will star Kamal in the lead role and will be written and directed by Mani Ratnam. Music for the film will be composed by AR Rahman.

On the other hand, post the success of Vikram, Kamal Haasan has resumed work on Indian 2, directed by S Shankar. The film also stars Kajal Aggarwal and Rakul Preet Singh in pivotal roles.