Jacqueline Fernandez has some of the most interesting and big-ticket films in her kitty. A couple of weeks ago it was also revealed that she will be playing a special role in Kichcha Sudeepa's much anticipated Kannada film Vikrant Rona. Today, the actress unveiled the first look of her character from the film in a grand manner. 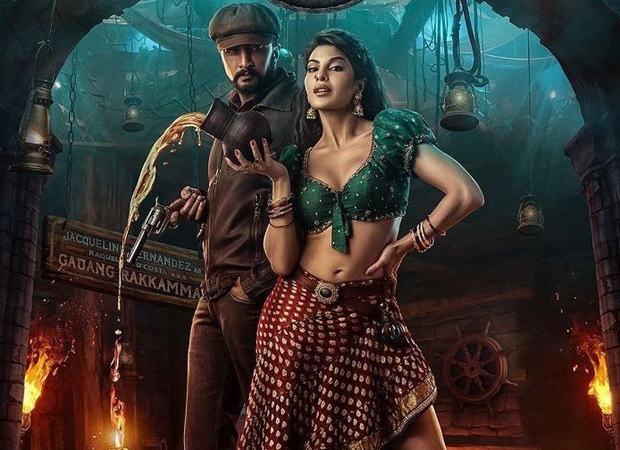 In the poster, Jacqueline looks stunning in a green blouse and red and gold frilled skirt. While Kichcha as Vikrant Rona is seen looking at her suspiciously while holding a gun in his hand.

Reportedly, Jacqueline essays a pivotal role as Raquel D'Costa aka Gadang Rakkamma. According to makers, Gadang Rakkamma runs a tavern in a fictional place and will be seen matching wits with Vikrant Rona

Vikrant Rona is a multi-lingual action-adventure film that will see a 3-D release in 14 languages and 55 countries. Directed by Anup Bhandari, produced by Jack Manjunath and Shalini Manjunath, co-produced by Alankar Pandian, and with music by B Ajaneesh Loknath, Vikrant Rona also features Nirup Bhandari and Neetha Ashok in the cast.

ALSO READ: Kiccha Sudeep thanks Jacqueline Fernandez for her performance in a song in Vikranth Rona