Disney’s Frozen 2 is leaving no stone unturned for the Indian audiences to experience the film’s extravagant magic. In a bid to bring forth strong individuals and uphold the new age warrior-princess Elsa, the studio has brought on board some fierce and independent women who reflect the reel character in real life, making them a perfect match. The most recent star to jump on the bandwagon is Shruti Haasan, who has been roped in to lend her voice for the valiant Elsa in the Tamil version of the highly awaited animated film. And that’s not all, the versatile star, who’s known to be an ace vocalist, will be singing 3 songs in the film. While the only released song, so far, 'Into the Unknown' is fast becoming a popular hit, Tamil music lovers are in for a treat as they see their favourite star in this all-new avatar. 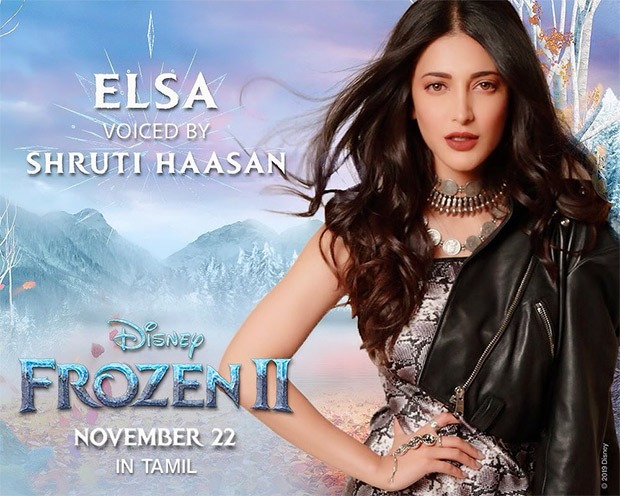 Excited about being a part of this iconic movie, Shruti commented, “I absolutely adore the movie Frozen and the bond shown between sisters Elsa and Anna is purely heart-warming. Being the elder sister, I completely resonate with Elsa’s feelings towards Anna and will do the same for my sister. Elsa is every girl’s role model and I am elated to lend my voice and get the opportunity to sing for Elsa’s character in Tamil. In addition to their gripping and engaging stories, songs in such animated movies hold a very special place in the hearts of fans and look forward to present the sequel to my fans and my Tamil audiences.”

We're thrilled to announce that the versatile @shrutzhaasan will be voicing Elsa in Tamil! ❄ Welcome to the Disney family! #Frozen2

With the anticipation at an all-time high, audiences from Tamil Nadu are in for a fantastic treat set in the realms of fantasy. Packed with an intriguing storyline, memorable characters, audiences are sure to regale in this much-awaited film as they watch Elsa and Anna set on another enthralling adventure. Leaving no stone unturned, Disney has roped in some of the biggest names for the dubbed version of the film. The Hindi version will feature Bollywood superstars Priyanka Chopra Jonas and Parineeti Chopra, while the Telugu version will feature Tollywood sensation Nithya Menen. The film is all set to be released in English, Hindi, Tamil, and Telugu on 22nd November.

ALSO READ: Shruti Haasan wishes father Kamal Haasan on his birthday with a lot of love!