A star in the making, Ghattamaneni Sitara is well on her way towards entering the big league. The 7-year old will be living the dream of every young girl out there as she will be lending her voice to the younger version of Elsa in the Telugu version of the highly-awaited sequel of Disney’s Frozen releasing on November 22nd, 2019. For the daughter of Mahesh Babu, an icon in the Telugu film industry, and Namrata Shirodkar, Sitara is all set to make her mark amongst fans of the franchise as well as local audiences. 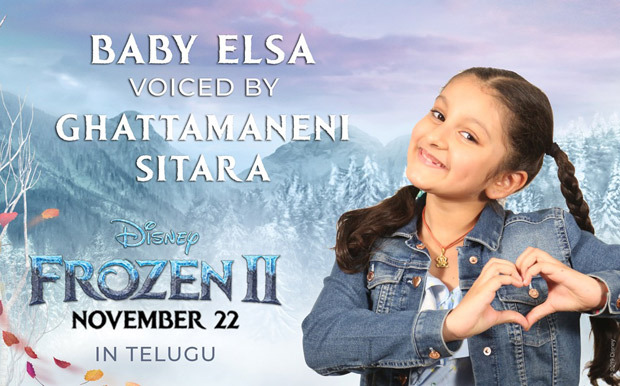 Speaking on the association, Sitara’s mother and actress Namrata Shirodkar commented, “Sitara has grown up to the tale of Frozen and has idolized Elsa ever since. Her love for the movie is so much that when she was offered to voice young Elsa, there was no way we could turn it down. It’s a movie that every girl relates to and Sitara is no different. We would like to thank the team of Disney for this wonderful opportunity, Sitara is extremely happy to be a part of the Telugu version of the movie and has thoroughly enjoyed voicing her favourite character.”

“Elsa’s transformation journey from Frozen to Frozen 2 is incredibly relatable to each one of us. Emerging as a strong-minded individual, Elsa also has traces of endearing innocence and vulnerability where she needs her support system. We are very happy to have Sitara on board to show that side of Elsa to young fans of the franchise. We are certain that the audiences will love her voice for Elsa,” said Bikram Duggal, Head – Studio Entertainment, Disney India.

With the film all set to be released on 22nd November, audiences from Andhra Pradesh and Telangana are in for a magical treat set in fantasy land. Packed with an intriguing storyline, memorable characters, audiences are sure to regale in this much-awaited film as they watch Elsa and Anna set on another enthralling adventure.

Frozen 2 is set to hit Indian theatres in English, Hindi, Tamil, and Telugu on November 22, 2019.