Telugu superstar Chiranjeevi’s 66th birthday celebration was a grand one but only included his family. However, the Telugu industry filled the social media with birthday wishes; the actor enjoyed his birthday with his family members. After a long time, there was a family get together. Chiranjeevi’s brothers Naga Babu Konidela, actor-politician Pawan Kalyan, other actors from the Konidela family such as Ram Charan Tej, Varun Tej, Sai Dharam Tej, and Panja Vaisshnav Tej were present on the occasion. 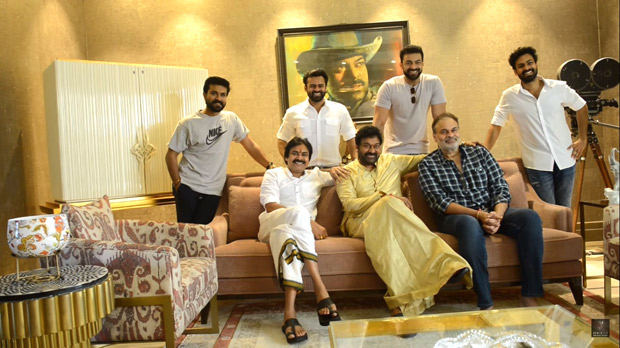 On Monday, Ram Charan shared a photo on his Instagram story that gave a glimpse of Chiranjeevi’s birthday bash. The photo featured Ram Charan with Chiranjeevi and other Telugu stars in the Konidela family.

Some of the photos have gone viral on social media in no time.

On the work front, Chiranjeevi will be seen in Acharya directed by Koratala Siva that will also star Ram Charan in a key role. The film was scheduled to release on May 13 but the makers postponed it due to the second wave of coronavirus. However, fans are waiting for the announcement of the new date. Besides Acharya, Chiranjeevi also has Godfather, Bholaa Shankar, and Chiru 154 in the kitty.