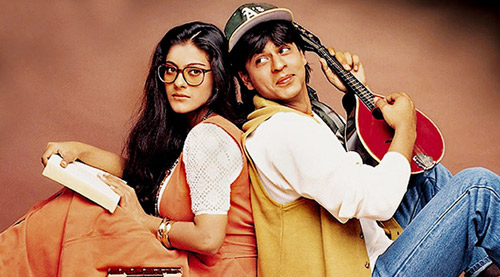 The word 'classics' in Bollywood is incomplete without this one film that has occupied the big screen over two decades - Dilwale Dulhaniya Le Jayenge. Bringing back those epic moments, the sweat and the hard work that went behind the making of this film, Yash Raj Films has come up with a documentary based on it.


Starting off, the film begins with a beautiful poetry by Yash Chopra and later, the documentary proceeds towards sharing experiences, thoughts and ideas that culminated into this film. Amidst actors speaking about the film, there is also a realistic touch as they speak to the public about their views on Dilwale Dulhaniya Le Jayenge. The woman behind Yash Chopra's inspiration, his wife Pamela Chopra too shares interesting anecdotes about the film, her son Aditya, Shah Rukh Khan and Kajol among others. While Shah Rukh Khan and Kajol are definitely an inseparable part of the video, they are their humourous selves as they wittily put forth their experiences while shooting the film, the fame they received post the success as well as the response that they receive even today, after two decades. What is also interesting is the fact that neither of them believed that the film will be marked in the history of cinema with golden letters.


The film is a compilation of a lot of moments curated from the making video of DDLJ as well as some special moments from the film but the important aspect of this documentary remains to be certain incidents as well as thoughts that were shared by the actors and others involved. For example, Shah Rukh Khan revealed that Aditya Chopra did not want to add action sequences but ended up doing so on Shah Rukh's insistence. Or when the script was given to Shah Rukh Khan he thought the role made him look 'pansy'. Well these are just a few but the documentary is filled many such trivia that would make a DDLJ fan go gaga over the film once again.


Getting into the depth of Indian cinema and the influence of Dilwale Dulhaniya Le Jayenge, interviews of a renowned poster collector to cinema academician, the documentary has a lot more to offer than just the cast and crew talking about the film. From wedding planners speaking about the influence of DDLJ on real life romance to an old footage of Filmfare awards, the documentary has covered many such interesting tid-bits in a span of little over an hour.


Whilst many like Karan Johar, Manish Malhotra, even Uday Chopra (who was an AD for DDLJ), Farah Khan, Saroj Khan spoke about the film, the film's director Aditya Chopra was as usual missing from the documentary. A film is a director's baby and it would have been a lot more interesting if Aditya Chopra would shed his camera shy image and speak about his debut directorial.


This documentary may have had dips in between but it will definitely not bore you, especially if you are a huge fan of Dilwale Dulhaniya Le Jayenge. Like the cast and crew, be sure to experience moments of nostalgia as you sit through this film.