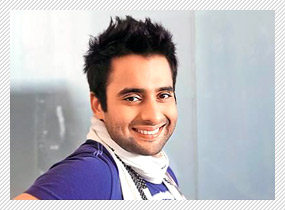 heads on and still came trumps with his F.A.L.T.U turning out to be a good success. This year he is arriving amidst a crowd as well where Students of the Year is in

the running and Chakravyuh and Rush are there for competition. Still, the mood is upbeat at Bhagnanis, what with as many as five premiers being held for the film,

a first. If Jackky is to be believed, this is all thanks to the kind of conviction that his dad Vashu Bhagnani has in the film which has resulted in such hype.

"Honestly, after F.A.L.T.U, I wanted to do another college film campus film. I wasn't too sure if I wanted to do Ajab Gazabb Love. I told dad about it and shared my

apprehension if it would be a good idea to do this film. However, he found the film's script really sweet. He also told me one important thing that as an actor you are taken

seriously after you have done a commercial film. Ajab Gazabb Love was one such film that had all the ingredients to carry good mass appeal and it is entirely due to dad

and Sanjay (Gadhvi) sir's gut feel that I went ahead and did it", says Jackky.

There were various funny scenes incorporated into the film's narrative that made Jackky all the more positive about the film before it went on floors.

"Let's face it; if you can pull off a commercial masala film, then there isn't anything better than that. On the other hand Ajab Gazabb Love is as real as it can get. There

are no gizmos or anything high-tech happening, like the kind that you must have seen in Sanjay's earlier films. On the contrary we have a scene like 'Kele lelo' creating such riot

even though technically on paper it isn't that funny. It is just about how you go ahead and mouth that dialogue that brings on the fun element", he adds.

Today Jackky is happy that he has managed to pull off the film.

Smiles Jackky, "As clichÃ©d as it may sound but if you can romance around trees then you can do anything. I have done that in Ajab Gazabb Love and feel content. Yes, I

was a little apprehensive, as I had mentioned earlier, and wanted to wait for one or two more years before taking the plunge into this genre. However today I am glad that I heard

what dad had to say. Moreover Sanjay spent a lot of time with me and it was music to my ears when he announced that I was ready for the film. Now itâ€™s my turn to be ready for