A day ago, actress and singer Shruti Haasan took to her Instagram handle to share a collage of two pictures which she says were taken three days apart. Along with the collage she wrote a lengthy post talking about body shaming and her plastic surgery. 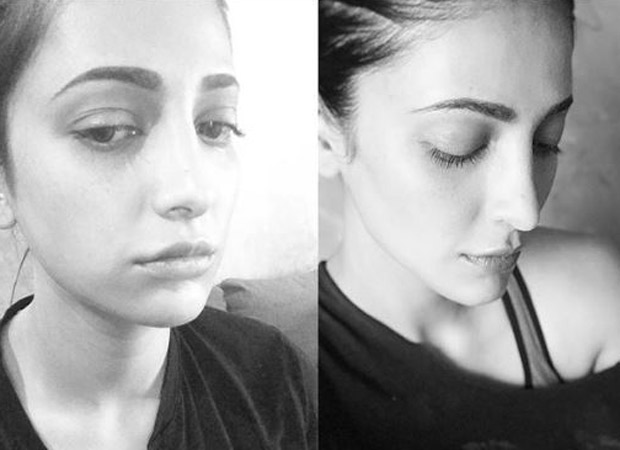 She started the note by writing, “I’m not one driven by other people’s opinions of me but the constant commenting and she’s too fat now she’s too thin is so avoidable.” A few hours before posting this collage the actress had shared two pictures of herself which received comments on her lean look. In her next post, she attributed her weight loss to hormonal imbalance and the mental and physical struggles that come with it. She also urged people to be less judgemental of others choices. She even admitted to going under the knife. "I’m happy to say this is my life my face and yes I’ve had plastic surgery which I’m not ashamed to admit. Do I promote it ? No am I against it ? No - it’s just how I choose to live," she wrote.

So .... I decided to post this right after my previous post and I’ll tell you why. I’m not one driven by other people’s opinions of me but the constant commenting and she’s too fat now she’s too thin is so avoidable. These two pictures have been taken three days apart. I’m sure there are women out there who relate to what I’m going to say. Most often I’m at the mercy of my hormones mentally and physically and over the years I work hard to try and have a healthy relationship with it. It isn’t easy. The pain isn’t easy the physical changes aren’t easy but what’s become easier to me is to share my journey. No one famous or not is in a position to judge another person. Ever. That’s just not cool. I’m happy to say this is my life my face and yes I’ve had plastic surgery which I’m not ashamed to admit. Do I promote it ? No am I against it ? No - it’s just how I choose to live. The biggest favour we can do for ourselves and others is just be and learn to accept the changes and the movement of our bodies and minds. Spread love and be chill . I’m learning everyday to love me for me just a little more because the greatest love story of my life is with myself and I hope yours is too :)

Talking to a tabloid, Shruti Haasan said that the post was not in response to an isolated event. She said she has been body-shamed multiple times. The actress said that she suffers from PCOS and would like other women to know that someone is talking about it.

She further said that there are a lot of actors who will never admit that they have done stuff to their faces, but she said she is not one of them. Shruti said that she does not want young girls to think that she woke up like this. Being the daughter of famous parents, Shruti said that she grew up in the public eye and denying things like these seems silly to her.

Talking about the plastic surgery, Shruti said that she had a nose job done to rectify a deviated septum and used to get fillers. She said that there was a time when she went crazy with lip fillers and did not like how thin her lips were. However, she now feels that has come back a lot closer to her natural look.

Shruti blames the film industry for instilling self-doubt and regrets falling prey to it. She said that she got fillers because directors and other people told her that her face was not Indian enough.