He is known for his versatile roles in Bollywood and he is known as the larger-than-life hero of the masses! But we hardly thought that the worlds of Ranveer Singh and Mahesh Babu will ever collide with each other. But it has happened and fans can’t stop gushing about it on social media. However, this one is not for a film! It is for the commercial for the popular cola brand Thums Up. 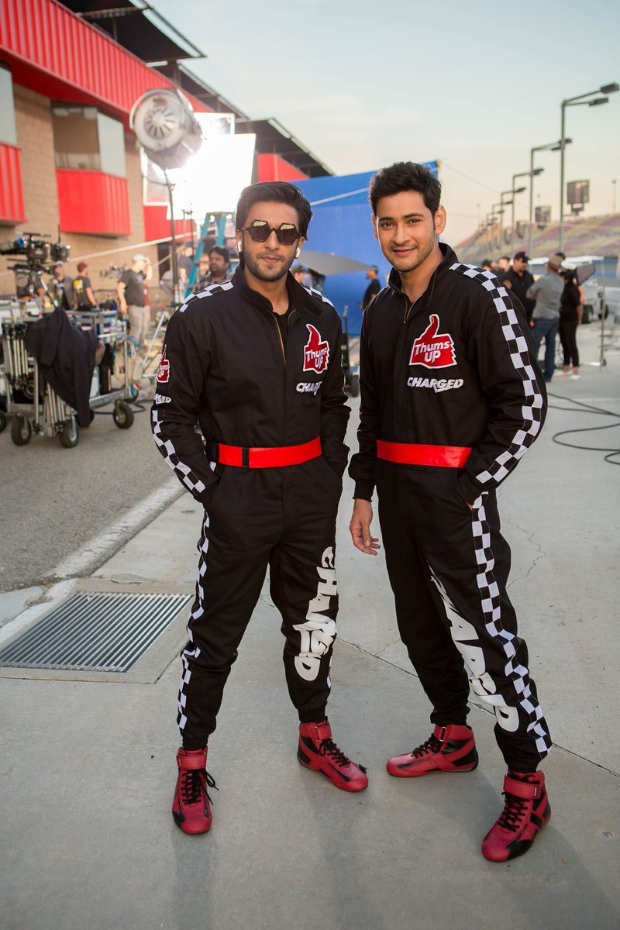 Well, let us remind you that Ranveer Singh and Mahesh Babu are currently the brand ambassadors of the cola brand. While Mahesh has been the face of it down South for quite some time now, Ranveer recently came on board about two years ago and replaced Salman Khan who was the face of Thums Up then.

Coming to their looks from the commercial, Ranveer and Mahesh are sporting similar looks of racers for the said ad. The two look quite suave in their black racing suits that are being termed as ‘charged’.  We would say that our curiosity has increased further and we can’t wait to see the two of them on the big screen.

On the film front, Ranveer Singh will next be seen in Rohit Shetty’s Simmba starring Sara Ali Khan. He has also shot for Zoya Akhtar’s Gully Boy featuring Alia Bhatt and has signed Kabir Khan’s ’83. There are also reports claiming that he will be seen alongside his alleged ladylove Deepika Padukone in a YRF film amidst reports of their marriage happening in November this year.

As for Mahesh Babu, unlike his contemporaries who like to enter Bollywood, the Telugu superstar has no such plans now. He is currently riding high on the success of Bharat Ane Nenu.