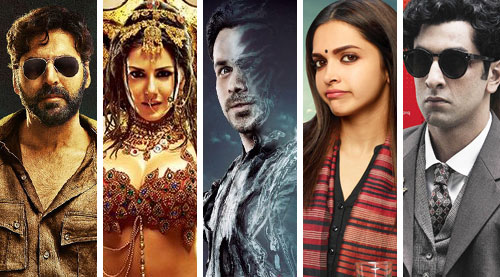 The IPL scare has gone, and how. From that rare year (2009) when not a single film dared to arrive during the IPL to now (2015) when films as varied as Gabbar Is Back, Mr. X, Ek Paheli Leela, Piku and Bombay Velvet are arriving in a big way on screen, it is quite apparent that filmmakers have moved on from the fear factor that was associated with the biggest sporting event in the country. Nevertheless, if one looks at the last seven seasons of IPL, the scare appears to be self-imposed as most of the years have actually thrown in a hit or two even as the cricketers were on the field and audience were glued on to screen.

Now that the 8th season of IPL is kick-starting this week, we look at some of the most prominent films that are all set to arrive and make it large.

Gabbar Is Back (1st May) - Akshay Kumar has already delivered a 100 crore success during this time period in Housefull 2 (2012) and it is pretty much a given that Gabbar Is Back would do much more than that.

Ek Paheli Leela (10th April) - The Sunny Leone starrer is the first film to arrive at the start of IPL and would pretty much pave the way for movies to follow. T-Series have managed a huge success during IPL in Aashiqui 2 (2013). They would be keeping their fingers crossed to make it two in a row.

Mr. X (17th April) - The Vikram Bhatt directed affair is targeted at the youth and since Emraan Hashmi has already scored twice during IPL with Jannat (2008) and Jannat 2 (2012), all eyes would be on how he delivers this time round.

Piku (8th May) - This sweet sounding film is yet another instance of Shoojit Sircar bringing his film during IPL. Last time around, his Vicky Donor (2012) had proven to be a 'lambi race ka ghoda' and was much loved too. One won't be surprised if the feat is repeated with the Deepika Padukone, Amitabh Bachchan and Irrfan Khan starrer.

Bombay Velvet (15th May) - Director Anurag Kashyap has the stage set for making it big during IPL. His producers Fox have had a good experience during IPL by successfully releasing and gaining benefits from Jannat 2 (2012). Now with Ranbir Kapoor and Anushka Sharma making their debut during IPL, it would be pretty much a game, set and match moment for the team.