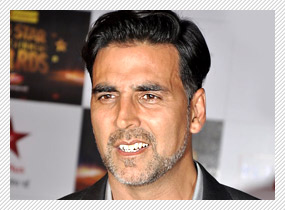 It is a known fact that Akshay Kumar has sung a love track titled 'Mujhe Mein Tu' for his upcoming film Special 26. It is also known that he has dedicated the song to his wife Twinkle Khanna. However, what is not known is the sheer reason that put him behind the mike. The truth can now be told though.

"It was the pain factor that did the trick", informs a source, "Akshay felt that Irshad Kamil's lyrics carried a lot of pathos to it. He was deeply touched, especially with the lines that go as 'Ishq Aashiqui Mein, Kuch Log Chhant-ta Hai; Zakhm Bant-ta Hai, Unhe Dard Bant-ta Hai'. Somewhere a chord struck and he got extremely emotional. He started playing the song which was already recorded in the voice of another singer. Before he knew, he was humming it all along. He just couldn't get the song out of his mind."

Those around him could sense that he was getting all emotional about the song and in no time persuaded him to come up his own version.

"Unlike many other songs that have been sung by superstars over the decade gone, 'Mujh Mein Tu' was a difficult rendition since it was neither a dance number nor a regular celebration track. Since it was quite slow moving, had a melodic base to it and didn't really carry scope of being camouflaged by the musical instruments, Akshay had to be really conscious before coming behind the mike", the source continues.

"Yes, it indeed was a very difficult. However I was really touched by the kind of pain that Irshad brought in his lyrics. I could sense that these words could have come from only someone who had actually gone through some 'dard' in his life", says Akshay, "I just went by the flow."

Guess this was one spur of a moment decision that he would certainly cherish for long.