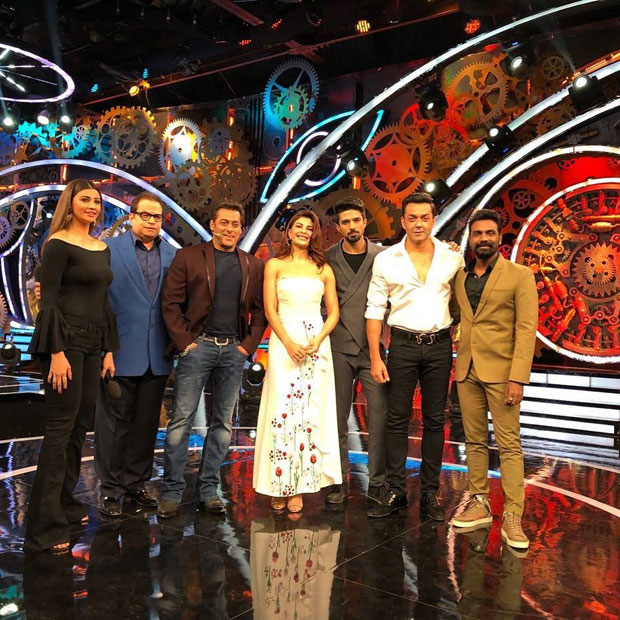 Just a few weeks ago, reports were doing the rounds that the film Race 3 will be much bigger and moreover, the promotions of the film has already kick started. The third instalment of Race that has just gone on floor this month will feature Salman Khan as the leading man and now the team of the action thriller has decided to make use of the platform of reality show Bigg Boss.

While Salman Khan has been associated with the controversial reality show for quite some time now, the rest of the cast of Race 3, in one of its kind of promotions decided to kick off the activities as soon as the film went on floor. Although most of the films start the promotions only a couple of months before the release, Race 3 team is said to be opting for a new method by making use of the small screen platform with the eleventh season of this reality show that is hosted by Salman Khan.

Furthermore, taking to social media was the superstar himself who shared this picture of him along with the cast ensemble that includes Jacqueline Fernandez, Daisy Shah, Bobby Deol, Saqib Saleem who play prominent roles in the film. Also joining them was producer Ramesh Taurani and director Remo D’Souza who decided to share the stage with Salman Khan for the weekend episodes of Bigg Boss. The cast recently shot for the same that is said to be aired this weekend and most of them who are active on social media, shared this picture on their Instagram page.

For the uninitiated, the Race cast has undergone a massive revamp with its third instalment. While the two previous instalments featured Saif Ali Khan as the leading man along with Anil Kapoor as his support system, this time around neither the actors nor the director duo Abbas Mustan are a part of the franchise. On the other hand, Jacqueline Fernandez who got associated with the film in its sequel will be a part of the third instalment too.