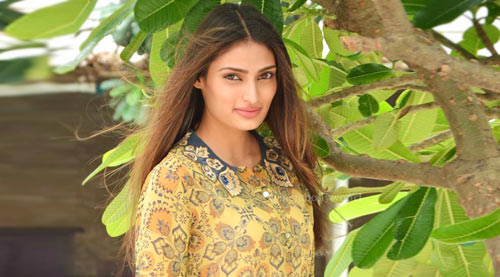 Bollywood's 'Muscle Man' aka Sunil Shetty made his 'smashing debut' (quite literally) with Balwaan. And now, exactly 23 years later, it is his darling daughter Athiya Shetty, who is all set to take the cine world by storm with her debut film Hero. While the release date of Sunil Shetty's Balwaan was on September 11' 1992, the release date of Athiya Shetty's Hero is September 11' 2015. Having born in a filmy family, Bollywood was nothing new for the star-kid Athiya Shetty, who, by her own admission, has attended many workshops in order to 'get into her character' of the film.


Satish Sundaresan of Bollywood Hungama met up with this damsel for a free-wheeling interview. Over to you, Athiyaâ€¦


Athiya, to start with, do you believe in destiny?
Yes, I do believe in destiny. When I was mere 10 years old and I understood the concept of being a 'director', the first understanding of being a director was Nikhil Advani for me. And the reason for this was Kal Ho Na Ho, that I was so obsessed with. All that I can say right now is that life has come a full circle for me, as now, I am doing a film with Nikhil Advani, which is nothing short of a dream come true.


Isn't it strange and surprising that Hero's release date coincides with dad Suniel Shetty's debut film Balwaan?
That's simply destiny of the highest order. Even though no one planned it, it just happened. My father too did not know about it, till someone brought it to his notice a few days ago. I am simply awestruck looking at the stark coincidence!


How are you feeling right now? Are you excited, nervous or are you simply adopting the policy of 'wait and watch'?
Even though I am trying to adopt the policy of wait and watch, the fact is that I am really nervous, very nervous. I just hope that we are accepted (by the audience) and also the film gets accepted by everyone. At the same time, I am also enjoying every moment now.


How were your growing up years?
I was a very naughty child. I used to bully everyone. I was a tomboy. I used to get along more with the boys than the girls. I was more like Kajol in the first half of Kuch Kuch Hota Haiâ€¦ totally tomboyish. I even had a 'bob cut' like Kajol in that film. I even forced my mother to get me (artificial) spectacles, only in order to look like Naina (Preity Zinta) in Kal Ho Na Ho. I used to speak like Poo (Kareena Kapoor) in Kabhi Khushi Kabhie Gham. My mother used to get so irritated with me while I was doing the 'Poo act' (laughs). All in all, my childhood was so very filmy!

When did the acting bug bite you? Did you always dream of becoming an actor one day like your father?
Trust me, when I was young, I just did not understand my father's profession. At the same time, I was a very filmy child. I, unfailingly, used to watch a movie every Friday. I always enjoyed being on stage, be it dance, acting or even singing.


What, in your opinion, are the advantages and the disadvantages of being born in a filmy family?
An advantage of having been born in a filmy family is that you get a readymade platform and the visibility, whereas the disadvantages are that people tend to criticise more than other actors. In addition to that, every action of the star-kid would be seen (read 'scanned') under the lens of a microscope. If you are a star-kid, you are very quick to be criticised and written off.

What was your first reaction when Hero was offered to you?

I was in total shock. I just did not believe it.


Is it true that your gym was 'instrumental' in you bagging the role?
Yes, totally! It so happened that Salman Khan sir's sister Alvira saw in the gym. She told Salman sir about me. Then, Salman sir spoke to my father and then, my father spoke to me about it. As I said, I was in total shock when I heard about the film offer. I just could not believe it.


How did your father react when Salman Khan spoke to him about offering you a leading girl's role in Hero?
He was extremely excited and also relieved because he trusts Salman sir totally.


We have always seen Vivan Bhathena in the 'hero' mould. With Hero, he will be attempting his first shot as a villain. How was he as a villain?
He is simply superb. He is an amazing actor. He has a larger than life persona on screen, and that really shows in the film.


In a nutshell, what is the story of Hero all about?
It's a passionate and intense love story. It is such type of love story that people would want to have in their lives and that they can dream about.


When you were offered this role, was in an instant yes from you or you took your time to give your nod?
Of course, it was an instant yes. When Salman Khan is producing the film and Nikhil Advani is directing it, I don't think that I have the right to so no. It will be stupid for me to say no to such a dream film. I truly believe that 'Your first film chooses you; whereas you choose your second film'.


What kind of homework did you do for the role?
We did a lot of workshops with the film's casting director Mukesh Chhabra, which also included scene study, character analysis et al. We got an in-depth analysis of our characters.


How many times have you seen the original Hero?
I had seen it only when I was young. But, after I signed up for its remake, I did not want to revisit the film as I did not want to get 'influenced' by that film in any way.

Which one has been the toughest scene while shooting for Hero?
It has to be the airport scene. It's an extremely emotional one. I cannot tell you anything else besides this. You have to watch the film to know what I am talking about.


What was your first scene in the film like?
In my first scene, I had to get out of my car and shout at Sooraj. My father was standing next to Nikhil sir while my mother was giving the clap.


Weren't you nervous or intimidated by the presence of your parents during the first day and that too, the first shot of the film?
I was really very, very nervous, but only till the time 'Action' was called out. After that, I became totally confident.

You are somebody who knows Suniel Shetty as the real father and also as the reel father. How different are these two?
To tell you the truth, I never used to watch him on screen. I did not watch a lot of his films as it were mainly action. Let me tell you one funny incident that had happened. I was watching his film Border, in which he dies. The moment I saw him dying in the film, I was crying like a mad child. And then, suddenly I saw him walking in the room from the main door. I was like, 'WHAT! Literally, mere do-do baap!" (Laughs uncontrollably).


How was it to work with Sooraj as your co-star?
He is an amazing co-star, who is extremely helpful. I am extremely lucky to be working with him as my co-star in my first film itself. He is an extremely selfless human being, who has a huge heart.


How does it feel to have Salman Khan as your 'Godfather'?
I feel extremely blessed. The advice that I get from him is straight from his heart. I get to learn to be a better person from him.


Does it scare you or make you nervous to see the kind of expectations that Salman Khan has from you? Also, the expectations that people have from you; majorly because you are Sunil Shetty's daughter and also a Salman Khan 'discovery'?
It is indeed quite scary. But, Salman sir has never made us feel like that. He has always told us to be ourselves. I just want to make Salman sir proud, because of the kind of faith and confidence that he has shown in me and Sooraj. I want to make him feel that he has made the right decision by choosing me and Sooraj (for his film).


With 5 being the highest, on a scale of 5, how will you rate Sooraj as a:


On a scale of 5, how will you rate yourself as a:


What was the rumour or gossip that you read about yourself recently?
That Sooraj and I had signed a no-dating clause! (laughs heartily). I need to confess that it was a creative rumour indeed.


News reports state that you love clicking selfies. Is that true?
NO. It's the PR people who tell me to take a selfie and put it up on Instagram.


Lastly, who is the 'Hero' of your life?
My 'naani' is the real hero of my life. She passed away a couple of years ago. She has always been the inspiration of my life.