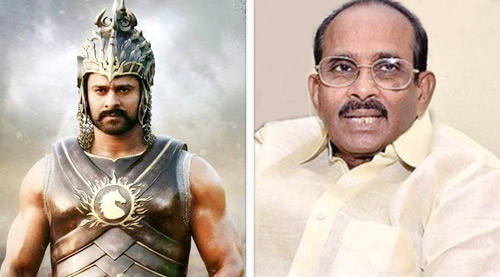 For the first time writer Vijayendra Prasad, the creator of the Bahubali franchise sheds light on the second part of the film.

Says the writer who also happens to be director S S Rajamouli's father, "We're expected to take the story to a higher level in every sense. That's what the audience expects from us. But the truth is, the second part of Bahubali was written into the first part. We already knew where we were going to take the characters and the plot. So the surprises in the sequel are for the audience, and not for us."

However Rajamouli promises to surprise himself in Bahubali 3. "We will have far more freedom to go into the unexpected in the third part, as the third part won't be related to the first and second part of Bahubali. It will be an entirely new self-contained experience."

As for Bahubali 2 here what we can expect. Vijayendra Prasad said, "It is going to be far more dramatic than the first part. Anushka Shetty's character of the queen in exile will take center stage in the second part. The plot points from the first part will be taken to a new level, so that the audience doesn't feel it is watching a repeat performance."

Father Vijayendra Prasad and son Rajamouli won't be interacting on the sets once the shooting of Bahubali 2 begins.

Says Vijayendra, "Once I finish writing my job is done. But if Raja is stuck or wants to make a change he can consult me."

What we won't see is Madhuri Dixit. Says Vijayendra, "We have no idea where this came from. The thought of casting her hasn't even entered our minds. It seems those who write media stories have more fertile imaginations than screenwriters," chuckles Vijayendra Prasad who has 40 scripts ready. "It's a continuing process. I keep writing and as time goes by I ruthlessly discard those scripts that are outdated.'