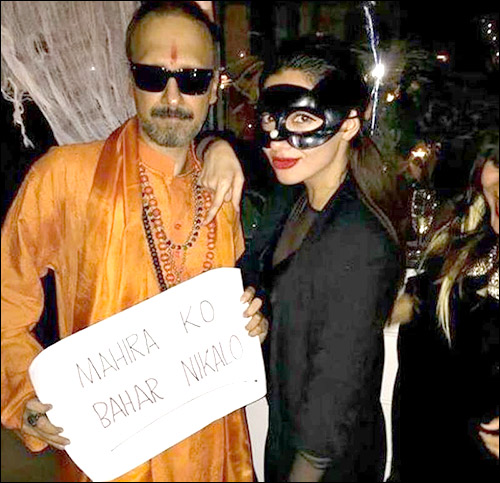 With the growing outbursts and controversies revolving around religious ideologies, from Indian superstar Shah Rukh Khan to Pakistani celebrities, many of them are in the line of fire of Hindu activists. Paksitani actress Mahira Khan was one of the celebrities to have faced a ban on her film Bin Roye and recently when a Halloween picture of the actress went viral, it did not go down well with many and the actress had to take to Twitter to apologize for the same.

Mahira Khan had to face the wrath of the Shiv Sena authorities when she was promoting her film Bin Roye, which could not release in India due to ongoing religious and political condition. The party also demanded the removal of Pakistani artists from Bollywood films which has left many popular filmmakers upset. Mahira Khan will be debuting opposite Shah Rukh Khan in Excel Entertainment's Raees and the film too has been facing troubles over the issue. A picture of Mahira Khan at a Halloween party went viral recently, where she was dressed with an eye mask and posed along with a man who was dressed like the Shiv Sena member holding a playcard saying 'Mahira Ko Bahar Nikalo'.

However, this post wasn't taken kindly and the actress decided to apologize for the same. She said, "The image from a Halloween event I attended has been made out to be something it never was. It was not done intentionally to hurt anybody's sentiments, neither to make a political statement. If I hv hurt anyone's sentiments w the image at the Halloween, I wd like to apologise as that was not what I intended & was unintentional.(sic)"

At the same time, the actress maintained her stand that such creative artists should not be dragged into the world of politics. She further said, "As many have said before me, artists are creative people who can't be dragged into the politics of nations. I have always made a concerted effort to maintain this standard for myself. Love and peace to all.(sic)"