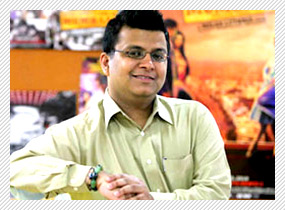 Tanuj Garg is tired. He'll probably lie on that if I asked his PR but he is unlike any other CEO / Producer you'll ever come across - forthright and unpretentious. He loves his coffee but ask me (I've known him for the last seven years) if Costa was to serve Vodka it would be his preferred choice. So I call for two special cold frappes. We are scheduled to meet in the rush hour at my favourite coffee destination. No sooner is Garg through the door; his eyes are indicating a voluminous chair (as good as a sofa) that dominates one corner of the aromatic surroundings. He grabs his seat, sips his coffee and is ready to talk movies. It's as if all his tiredness has disappeared. At that particular moment his eyes sparkle and his smile turns filmy as he emphasises on the collegiality of his team's working methods in Balaji. His domain is a lace of beauty (many gorgeous actresses have sat with him), of bullying (on rare occasions the CEO may get upset), talent (his marketing and creative team), muscle (a penny saved is a penny earned philosophy) and obsession (you have to meet Tanuj to know that). He may be the busiest multitasking head in the B-town but what very few know is that Garg is definitely one of the most inspiring individuals you'll ever come across. And to see that side of him, all you need to remember is to know his taste in coffee - 'wink' 'wink'. Part 1 of our special chat on Balaji and its super-kool successes follows...


Today, Balaji Motion Pictures is considered to be the most creative studio houses producing back to back 'super kool' niche box office successes since a couple of years. Incredible indeed!

Thank you! Yes, even if it sounds clichÃ©d, I think it's the creative vision of the company that's put Balaji Motion Pictures up there. Our objective is not to create set-ups. As a studio, it is important to back a good script and then demonstrate belief in it right down to marketing and promotions. Box Office is a key aspect but what matters also is credibility and people coming out of theatres saying, 'That was a good film'.


It's surprising to see you make films that push the envelope, that are niche, that are out-of-the-box in its content and yet make commercial sense.

The objective of Balaji Motion Pictures is to push the envelope in terms of content and at the same time create cinema that is inherently commercial. There is something unique about each of our forthcoming films - Ek Thi Daayan, Milan Talkies and Ragini MMS 2, to name a few. Instinct and gut play an important part in the selection of a subject. That's really where our skill set comes into play backed by Ekta's creative vision. It is important to be networked within the creative community, as a good idea is the starting point.

So how is it to develop projects and make them? Must be painstaking yet profitable.

Companies like Dharma, Yash Raj and Balaji believe in a good script being the starting point. Different business models work for different people but we like to live the dream from the beginning. We're not into acquiring ready off-the-shelf films blind-folded. One has to be part of a product through its life cycle.

What according to you should be the primary task of a producer besides budgeting a film?

A producer should budget his film smartly. A good producer is not one who necessarily makes the film for a low budget. If you manage to make a seven crore film in two crores, it doesn't mean that you are being a good producer because you are compromising and crunching on certain things. It's about how smartly you 'design' your budget without hampering the creative integrity of the film. At the end of the day, the economics of a film are all-important. The other equally important job of a producer is to stick his neck out and back a concept he believes in. When The Dirty Picture was announced, people asked if a woman-oriented film would work. During Ragini MMS people wondered why we were making a low-budget horror film with a handheld camera. It's a feeling of joy when you believe in something and that something works.

It's the season of sequels. So, it's good to capitalise on the brand you had created a few hours ago called Kya Kool Hain Hum.

If you say that we are capitalizing on the brand value of Kya Kool Hain Hum, we are. Nothing wrong, is there? Today Hollywood is surviving largely on franchises! A Brand has a ready audience and why should one not capitalize on a brand that one has painstakingly built? Kya Kool Hain Hum, back in 2005, pioneered the wave of naughty adult comedies. We hope that the sequel Kyaa Super Kool Hain Hum takes the madness to a new level.

Watch this space for Part 2 of Tanuj Garg's interview