After the release of The Sky Is Pink, Priyanka Chopra flew to New York to complete her work and then joined her popstar husband Nick Jonas on his world tour with Joe Jonas and Kevin Jonas. The Jonas Brothers are currently doing their first world tour Happiness Begins after their six years of hiatus. 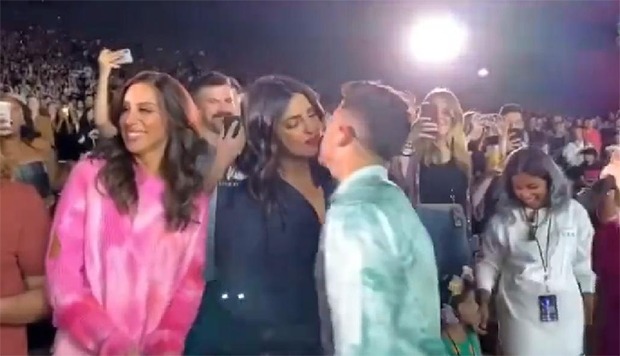 The group performed at Hollywood Bowl last weekend and it was a hot affair. In a video that has gone viral, Priyanka Chopra and her sister-in-law Danielle Jonas were standing in the VIP area and cheering for the Jonas Brothers. Kevin first walked past Danielle and kissed her and then Nick came along and kissed Priyanka. Joe missed his wife Sophie Turner and pretended to reach to a man for a kiss.

Priyanka Chopra recently celebrated her first Karwa Chauth with her husband Nick Jonas during his tour stop in San Diego. The two of them even shared photos of their celebration.