Varun Dhawan and Anushka Sharma play innocent rural folk from heartland India in Yash Raj Films’ upcoming entertainer Sui Dhaaga – Made in India. The two superstars play Mauji and Mamta, a tailor and an embroiderer respectively, who dream to make a name for themselves. A film that’s rooted in India demanded it to be shot as authentically and genuinely as possible and Varun and Anushka gave themselves completely in the hands of their director Sharat Katariya, whose previous film Dum Laga Ke Haisha was a blockbuster. In one particular scene Sharat wanted the two superstars to travel sitting on the roof of a public bus! Here’s why! 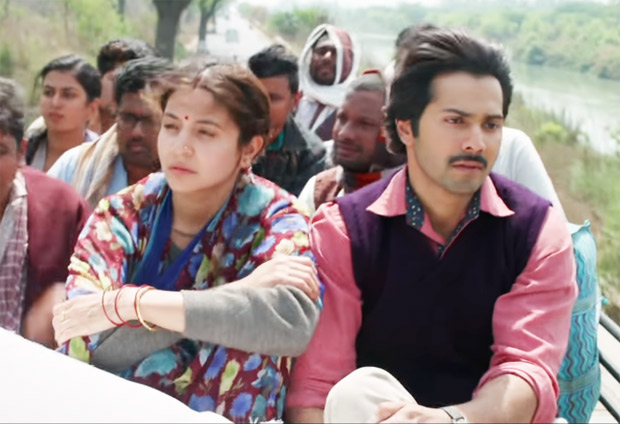 “We shot for about two days while sitting on the roof of a crowded moving bus. People in small towns sit on the top of buses because they are always overcrowded and bus service isn’t as frequent as in cities. So, they have to get on it come what may. The bus scene brings focus on the daily struggles of people living in the small towns of India. It brings to focus their determination and courage and belief. It is one of the most iconic scenes in the movie,” reveals Varun.

Anushka says, “Sharat has exceptional eye for detail. The scenes of struggle, the spirit of self-belief in people living in such towns in India – these visuals are etched in Sharat’s mind and he wanted to present the everyday life in rural India with perfection and authenticity. He wants audiences to understand the courage that people from such parts of India have. He wants audiences to believe in Mauji and Mamta. The bus scene shows how these two characters find support and love in each other to believe that they could make a name for themselves and realise their dreams.”

A film about finding love and respect through self-reliance, Varun and Anushka have been paired for the first time and have become the most-awaited, freshest on-screen jodi of 2018. Yash Raj Films’ entertainer Sui Dhaaga - Made in India is set to release on September 28 this year. It brings together National Award winning producer-director combo of Maneesh Sharma and Sharat Katariya after their blockbuster Dum Laga Ke Haisha. The film is a special salute to the inherent entrepreneurial spirit that the youth of India and our local artisans have.

Also Read: Varun Dhawan opens up about nepotism in Bollywood and David Dhawan being his hero