Well, she may not be coming on the big screen very often but Sunny Leone is definitely quite active on social media. The actress shares many posts on Instagram and one amongst them that grabbed our attention was this video. She posted a video with Daniel Weber after she took up the handcuff challenge. 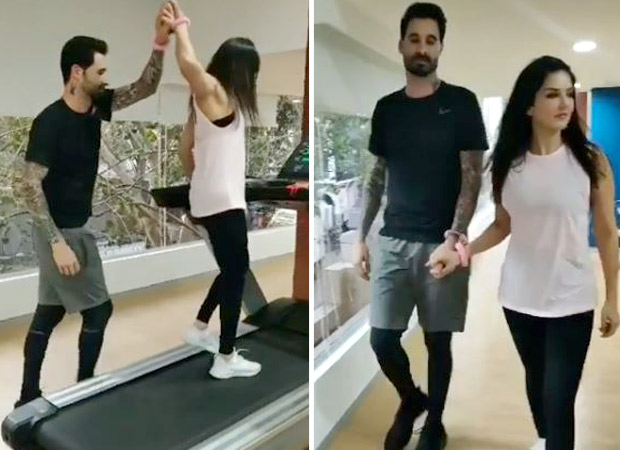 In the video, Sunny Leone is seen putting the handcuff on her and her husband Daniel Weber’s wrist and exercise together. The two of them shot the video against the backdrop of a gym, wherein Sunny and Daniel ended up doing cardio together. The actress was not only excited to take up the challenge but also added that she enjoyed taking it up.

She posted this video on Instagram saying, “Doing the #HandcuffChallenge at the gym was so much fun! #HubbyLove @dirrty99.”

Doing the #HandcuffChallenge at the gym was so much fun! ???? #HubbyLove @dirrty99 ???? Why don’t you join me? Tie yourself to something or someone you can't live without. BTW I absolutely #LOVE this song! ❤#JustYouAndI by @iamtomwalker @sonymusicin

On the work front, Sunny Leone is expected to make a full-fledged South debut with the multi-lingual Veeramadevi. The film will feature her in the role of a warrior princess and it is expected to release in five languages like Malayalam, Tamil, Telugu, Kannada and Hindi. The actress will also be doing special appearances in the Mammootty starrer Madura Raja and Diljit Dosanjh starrer Arjun Patiala.

Also Read: These pictures of Sunny Leone with her twins are all you need to see on a Friday morning!