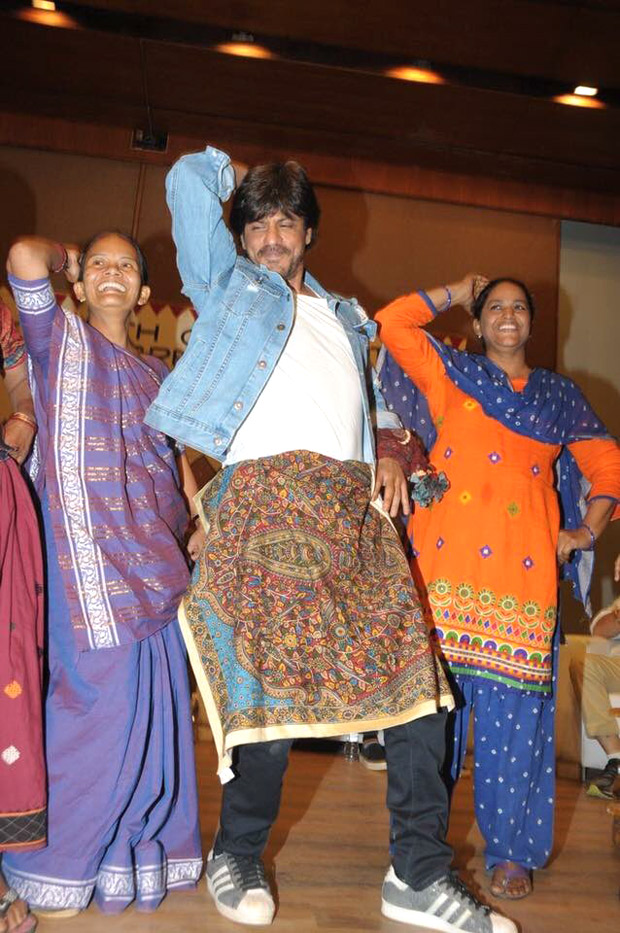 Just a week ago, Shah Rukh Khan's highly anticipated film Raees released worldwide. The fans couldn't be more excited to watch Shah Rukh Khan on the big screen portraying the grey character. Although the film has released, the team of Raees is on a multi-city promotional spree ever since the release of the film.

After receiving a phenomenal response in Pune, Hyderabad and Amritsar, Shah Rukh Khan and team reached Ahmedabad to continue the promotions. SRK met women workers of Self-Employed Women's Association (SEWA) earlier this week for a session of `Dialogue with grassroots managers, entrepreneurs and collective enterprises'. He shared a video with all the women workers in the background cheering for him and captioned it, "With @SEWABharat in Ahmedabad. Women r my teachers. Thk u for Really believing in Koi Dhanda Chota nahi hota...lov u all Bens & Rima Ben."

As Raees' story is set in Gujarat, Shah Rukh Khan wanted to visit the city and interact with his fans. The full-packed day involved him giving interviews and then entertaining the female fans of all ages at the seminar. He even recreated some of his famous dialogues with the women entrepreneurs as the audience cheered for him. He even tried saying some of his dialogues in Gujarati.

with @SEWABharat in Ahmedabad. Women r my teachers. Thk u for Really believing in Koi Dhanda Chota nahi hota...lov u all Bens & Rima Ben pic.twitter.com/yfRfQegi7N

It's amazing how @SEWABharat is empowering women & giving them a new lease on life. It's great to hear their stories. #RaeesInAhmedabad pic.twitter.com/f1gRPovHjV

.@iamsrk lightens the mood with his charisma and the women of @SEWABharat love it. #RaeesInAhmedabad pic.twitter.com/Tas4U9GlWC