Salman Khan is known for his larger-than-life and quintessential action sequences in his films. But we caught the actor in an action mode off the screen. Although it didn’t have anything to do with a fight sequence, the superstar was seen flaunting his archery skills. And man! We are impressed with it. Salman was seen taking up an archery session in Goa and here’s what happened! 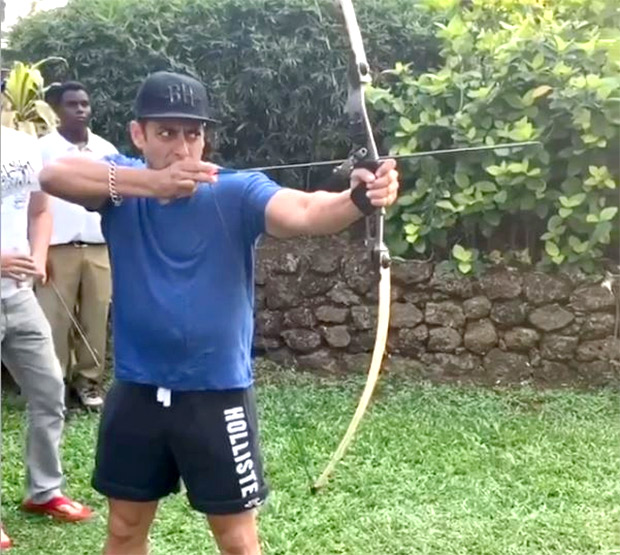 After travelling across continents, Bharat has finally returned to India and the team of the film is currently in Goa. During the schedule, it seems that Salman Khan decided to make use of his break time and planned to catch up on the sport of archery. A video of the actor in the session has gone viral on social media and fan clubs have been sharing the same on varied platforms. We too came across the video on one such page and it features the actor seen intensely concentrating with the bow and arrow in place. He ended up surprising his team with his bullseye shot. The video also has his team cheering loudly for him as he was about to take a shot. Here’s a glimpse:

If reports are to be believed, Bharat, which will see Salman reunite with his Tiger franchise leading lady Katrina Kaif, will be shot in Goa this month. The film, which went on floor last year, has been shot extensively in many locations within India like Punjab and Delhi and also on foreign shores in places like Abu Dhabi and Malta.

Coming to the film, Bharat is a remake of the Korean drama Ode To My Father, which has been adapted to the big screen by Ali Abbas Zafar. The latter has made some alterations in the script to suit the need of the Indian audiences. Besides Katrina, the film also stars Tabu, Jackie Shroff, Disha Patani, and comedian Sunil Grover in pivotal roles. The film traces the journey of a common man, from the pre Independence Era to contemporary times and will have Salman sporting almost five looks in the film. It is expected to hit the screens during Eid next year.