Priyanka Chopra may have made her way to Hollywood with her music career but it is her lead role in ABC crime drama Quantico that gave her massive recognition in the West. The show premiered a couple of years ago with a good response from the audience. From red carpets to late night talk shows, magazine covers to A-list parties, Priyanka Chopra is doing it all. Recently, she began to feature in Harper's Bazaar series of Little Black Book which will showcase behind the scenes of her life, her beauty secrets, her fashion secrets and much more. 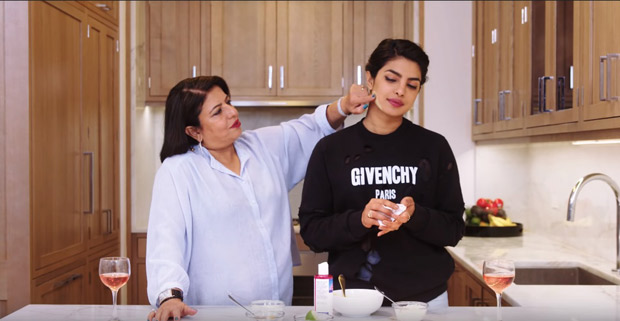 Priyanka Chopra, who is very close to her mom Madhu Chopra, has been featured in the second episode of Little Black Book. PC calls her mom as "most important person." Though Priyanka works with the best people around her when it comes to style, beauty and etc, she often calls her mom for certain desi beauty tricks. "Since she was a little girl she always took care of her skin, and made me realize when I was a little girl the importance of it. Of course when you're young, you don't listen as much but as I grew older I realized all these little tricks and amazing secrets that she had were integral to my skin," Priyanka said to Harper's Bazaar.

In the second episode of Little Black Book, Priyanka Chopra and Madhu Chopra reveal the desi tricks of taking care of your skin. They said that coconut oil works wonders when it comes to cleaning skin and removing makeup. She gave some of the best remedies that you learn in an Indian household like applying ubtan on your face made from turmeric and other ingredients that are easily available at home.

Priyanka Chopra, on the work front, is currently seen in the third season of Quantico. The show currently has 13 episodes. This season’s finale will work as the series finale as the show as cancelled by ABC Network. She will be next seen in two Hollywood films- A Kid Like Jake and Isn’t It Romantic. She will soon begin shooting for Ali Abbas Zafar’s Bharat which stars Salman Khan and Disha Patani.