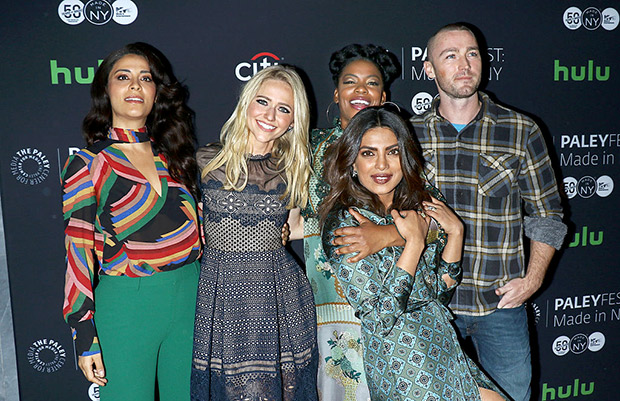 Priyanka Chopra is back on TV screens after a long hiatus during winter break with her crime drama Quantico. Although Priyanka is in New York, she never forgets her audience in India.

As Quantico aired in India last night, Priyanka had a special surprise for all the Indian fans of Quantico. In a short clip to announce the mid-season premiere in India, Priyanka got her cast to speak in Hindi. She captioned it, "India: Hum aa rahein hain, aaj raat, as #QuanticoOnSW returns from its winter break! #TerrificTuesdays @StarWorldIndia."

In the video, Priyanka says, "We are very excited because 'Quantico' has been moved to Tuesdays at Star World." Then, her co-stars Jake McLaughlin, Yasmine Al Massri, Blair Underwood and Johanna Braddy, join her and say, "Hum aa rahe hai (We are coming)".

Priyanka Chopra is flying high as she recently bagged the People's Choice Award for Favourite Dramatic TV Actress. She dedicated the award to her Quantico cast and crew who have made her feel at home in Hollywood.

Besides Quantico, Priyanka Chopra will also be seen in Dwayne Johnson and Zac Efron's action comedy film Baywatch which is slated to release in May 2017.