The nation has been left in shock since the untimely demise of Sridevi. The veteran actress died on Saturday evening. The Indian film industry is mourning the loss of the actress. Kamal Haasan, her Sadma co-star, fought back his tears after learning about Sridevi's sudden demise.

In a heartfelt video, Kamal Haasan paid tribute to Sridevi. He called her astounding talent and hardworking actress. "Mrs. Sridevi Kapoor's astounding talent was no luck. It was well-deserved and she worked for it from her childhood. I'm also a child actor; I've known her from her teens. She was still a child then when she came to work with me and Mr. Balachander, my mentor sometimes gave me the responsibility of working with her, correcting her and shaping her acting, even her dance moves. When she came she was not as talented as she is, she was. But she developed every day she learned. I was astounded by her climb and every step of it she worked for. She was very fond of me and I was very fond of her. Our paths diverted when she became a superstar in Hindi cinema. She has acted in almost all languages. She acted in about 27 films with me.” 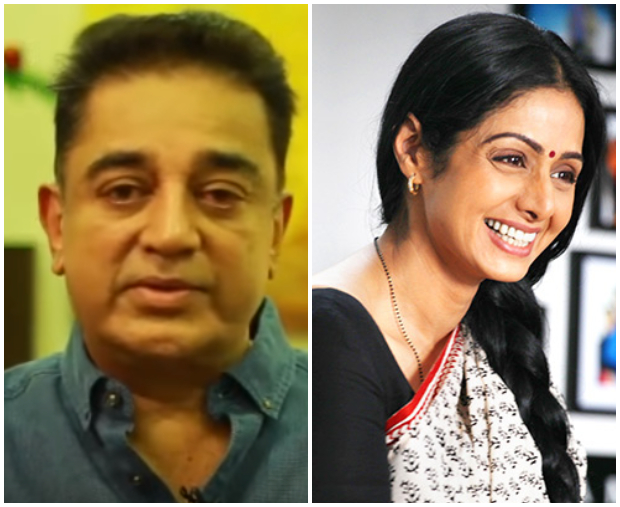 Kamal Haasan further added, “The moments we had were all in film shootings. We were working so continuously that our personal lives were on the periphery... So the kind of dedication she had truly matched mine and so it's no wonder that we were fond of each other. I think I saw her last month and we are not prone to showing emotions but somehow we both hugged each other and I am very grateful for that hug. Sadma song rings in my ears now. I think that's a great lullaby for this talented beautiful Sridevi. Well, she had a happy life."

“My deepest condolence to the family- Mr. Boney, the children. I know they loved her and I know how much she loved her daughters. I used to make fun of it. Some other day, when we were in a party, I found both the daughter and mother cuddling in a corner and showing love to each other and I was making fun of that. That poor child is going to miss all that,” the 63- year old actor said.

Kamal Haasan even took to Twitter yesterday to share his condolences. He wrote, "I could hear the song from Moondram Pirai now. We've seen this lady transform from an enthusiastic child artiste to a talented actress and an elegant homemaker. To hear this news of her death is tragic. My condolences to her dearest."

The South film industry has reached out to the Kapoor family and paid tribute to Sridevi. Rajinikanth and Venkatesh even reached Anil Kapoor's this morning to pay last respects to the actress. As of now, the Kapoor family is waiting for Sridevi's mortal remains to arrive in Mumbai. The last rites reportedly will be carried out on February 27.