Last Updated 28.03.2020 | 7:23 PM IST
feedback language
follow us on
Home » News » Bollywood Features News » Watch: From discussing Jackie Shroff’s journey in Bollywood to getting a glimpse of Tiger’s childhood escapades, the father-son duo bare all on Koffee With Karan 5 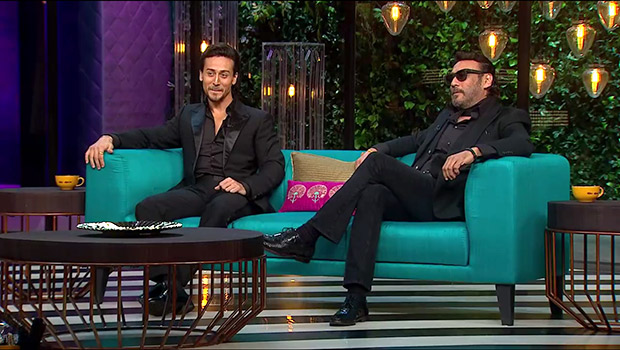 Karan seems to be exploring all relationship duos on this season of Koffee with Karan – from co-stars, to childhood friends to married couples. Get ready for this season’s first father-son duo with the flamboyant Jackie Shroff and martial arts and dance extraordinaire Tiger Shroff! The duo will mark their debut on Koffee with Karan in this Sunday’s episode.

Looking dapper in a black suit, Jackie will prove that he has still got the all the charms of being the quintessential ladies’ man as he answers Karan’s questions with his unique style and panache. From calling himself younger than the new generation of actors to stating that love is overrated to professing his eternal love for Madhuri Dixit as the woman who still makes his heart go Dhak Dhak, Jaggu Dada is his usual candid, cool classic self.

Tiger, who seems diametrically opposite to his father, will steal your heart with his honesty even as he reveals his childhood crush on Shraddha Kapoor, taking his father by surprise! And as is with every parent-child relationship, Tiger will be left embarrassed when Karan asks if he would go to his father for advice about sex, to which he declares a resounding no, leaving both Jackie and Karan amused!

Reminisce the magic of the 90’s with Jackie Shroff and glimpse into the life of emerging superstar Tiger Shroff on Koffee with Karan Season 5 this Sunday.