Kapil Sharma recently resumed the shoot of his television show The Kapil Sharma Show along with his team. They resumed shooting after 125 days. The team members have been taking to their Instagram handles to give everyone a glimpse as to how they are adapting to the pandemic. 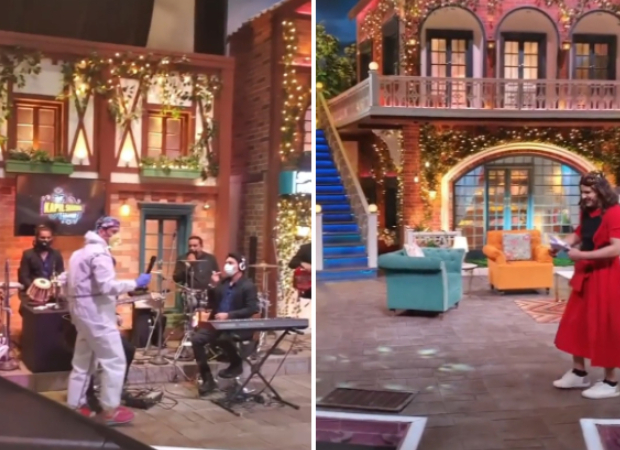 Archana Puran Singh who is the judge of the show, often shares videos on her social media handle giving all the fans a glimpse into the backstage 'masti'. When she resumed shooting, she shot a video from the set. In the video, the technical crew was seen wearing PPE kits. The band members had a face mask. Archana revealed that the entire set was sanitised and that the artists could not wear a mask as they were about to shoot. However, what was interesting was that a section of the seat of the audience was replaced by cardboard cutouts of people and placed on the seats. While the other side of the set had actual people sitting at a safe distance from each other.

Archana Puran Singh sharing the video, wrote, "Behind the scenes #TKSS•we all met each other excitedly but couldn't hug. So made do with excited hellos. There's always so much FUN happening on the sets of The Kapil Sharma Show (even with all the stringent protocols.) And God. How I've missed it. So good to be back !”

•its a set we left 4 months ago, little knowing we'd have such a long break. Now that we're back, it's as if we never left. The energy, the vibes... the sheer charge in the atmosphere was electric. And the hilarious performance by @bharti.laughterqueen @kapilsharma @krushna30 @sumonachakravarti @kikusharda and @rajivthakur007 was absolutely MINDBLOWING! With all precautions in place to ensure safety protocols and a fabulous creative team of @bharat_shutterlust @vanky1 we are ready to bring rip-roaring laughter into your homes once again. Thank you @rishinegi24 @banijayasia and @sonytvofficial for taking such care to make our shoot environment safe and secure. Outfit: @pooja_shroff_official Jewellery: @the_jewel_gallery

In another video, shared by Archana, she is seen interacting with Sumona, Bharti and Rajeev Thakur. One can also hear the director of the show giving strict instructions to all. Have a look:

•we all met each other excitedly but couldn't hug. So made do with excited hellos. There's always so much FUN happening on the sets of The Kapil Sharma Show (even with all the stringent protocols.) And God. How I've missed it. So good to be back ! @sumonachakravarti @kapilsharma @bharti.laughterqueen @rajivthakur007 @bharat_shutterlust

ALSO READ: Kapil Sharma shares a picture from his green room; jokes about the people in PPE kits