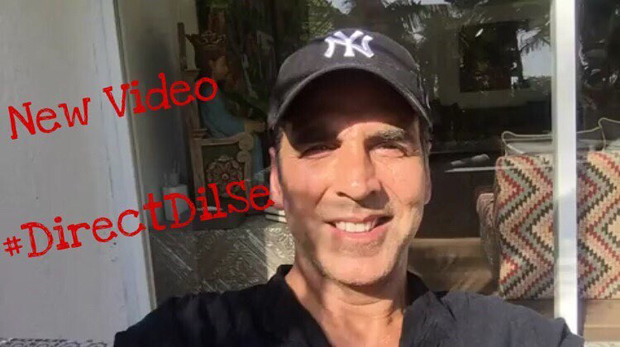 Akshay Kumar aka Action Kumar has always been pursued as an action star until he changed everyone’s perception. Now being in the industry for 25 years, Akshay Kumar is one of the most successful actors in the industry. This evening, he was conferred with the National Award for his performance in Rustom.

On this special occasion, Akshay Kumar shared a video urging the youngsters to not give in to any pressure. It could be personal or academic but he said that there is a solution to their problems. He captioned it as, "Like there's no lock made without a key, no problem comes without solutions. Watch & do think, sharing with u'll some thoughts, #DirectDilSe.

In the 4-minute long video, Akshay Kumar began by expressing his happiness over the National award win. Then, he talked about failures and told the story about he had failed in school.  He said, “"I remember the day when my result was announced and I hadn’t score too well. I won't lie - I actually failed in that class. On my way back home, I kept thinking that I’d be thrashed. That day, my father asked me what I wanted to pursue in my life. I said mai khel kood karna chaahta hoon, khiladi ban na chaahta hoon. And he said fine, concentrate on that. We'll support you. Had he not explained and asked me to identify my strengths, I couldn't have ever imagined winning this National Award.”

Addressing the recent suicide cases including the one where a 24-year-old jumped from a hotel room, Akshay said, "Tumhari jaan ek exam ki marksheet se sasti ho gayi hai? No matter what stress you have in life, just imagine the condition of your parents when they'll find out about your suicide. Shayad aap soch bhi nahi sakte unhe kaise feel hoga."

On the work front, Akshay Kumar will be next seen in Toilet- Ek Prem Katha with Bhumi Pednekar. It is slated to release on June 2, 2017.