The coming weekend will see Sony Entertainment Television's The Kapil Sharma Show hosting the team of the much talked about historical drama Prithviraj. Kapil Sharma will play host to Akshay Kumar, Manushi Chillar and filmmaker Dr Chandraprakash Dwivedi. Needless to say, owing to the fun format of the show, a lot of hilarious skits and fun interactions are expected to be a part of the show. On the other hand, the team will be speaking about their forthcoming film as a part of their promotions. Along with their usual banter with Kapil Sharma, in-house artists will be setting the scene for paisa vasool entertainment with their amusing antics. 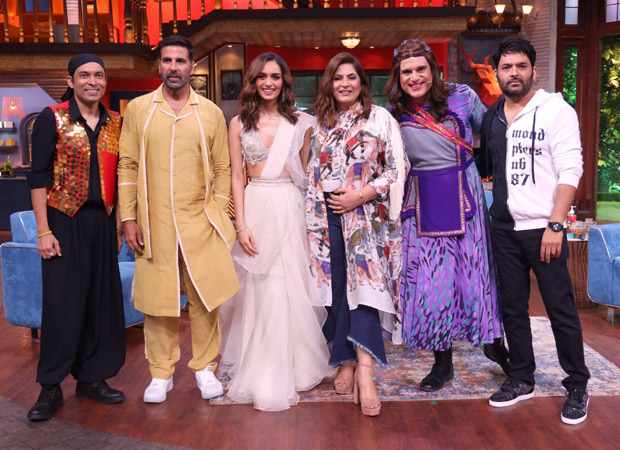 At the start of the show, Kapil Sharma and Akshay Kumar will be discussing the need for staying fit and healthy, obviously in their usual fun manner. This would then be followed by a tete-a-tete with the host, where the guests would be answering his questions about the film. We got a glimpse of what to expect from this episode in this YouTube promo from The Kapil Sharma Show. What we can’t get over is seeing Akshay Kumar shaking a leg to the iconic song 'Tu Cheez Badi Hai Mast Mast'. Needless to say, he did it in true OG style along with the show’s comedian Chandan Prabhakar. The latter even dressed up like Bollywood star from the film. The original song was from one of Akshay’s biggest hits Mohra and the said song also featured Raveena Tandon and Paresh Rawal.

Speaking about the Yash Raj historical drama Prithviraj, the film features Akshay Kumar in a titular role. Former beauty queen Manushi Chillar will be making her Bollywood debut with this film. Directed by Dr. Chandraprakash Dwivedi, the film is slated to release on June 3, 2022.