Vineet Kumar Singh amazed fans with the news of his wedding. The Mukkabaaz actor took to Instagram on Tuesday evening to announce that he has tied the knot with his long-term ladylove Ruchiraa Gormaray. 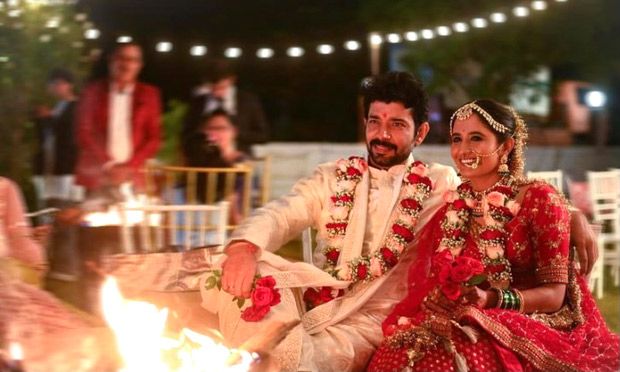 In the images, Vineet Kumar Singh was outfitted in a white traditional outfit while Ruchira Gormaray went for a red lehenga for the marriage day. In the first image, the duo was seated by the fire pit and it looked like the wedding traditions had ended. The other picture featured the couple standing together for a formal wedding picture.

Sharing the picture, Vineet wrote, “29/11/2021 Holding your hand I came so far. Feeling truly blessed to have you in my life! @ruchiraagormaray Thank you, everyone, for your love and blessings.”

Actor Vineet and his wife Ruchiraa were showered with congratulatory messages. Aahana S Kumra wrote, “Vineeetttt! Ruch!!!!!!! Congrats both of you!!!” Comedian Saloni Gaur wrote, “Congratulations Vineet.” Fans also congratulated the couple. The two tied the knot in Nagpur after having dated for eight years.

In an interview, Vineet talked about his intimate affair. He mentioned that he had always wanted close friends and family members in attendance. He said that rituals were followed by both Maharashtrian and North Indian. It was all in one ceremony.

Vineet Kumar Singh has starred in a number of movies and a couple of series as well. These include Gangs of Wasseypur, Mukkabaaz, Betaal and Bard of Blood.